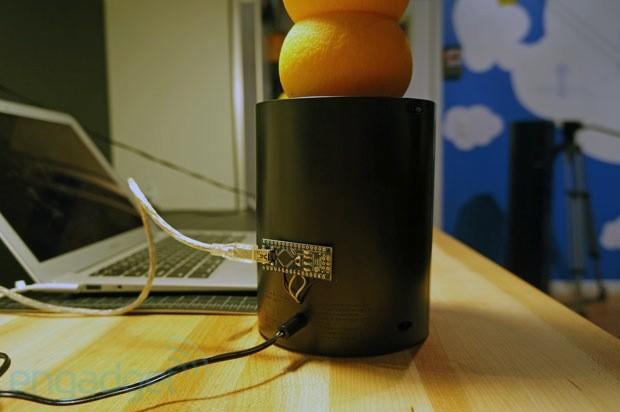 When we visited BeatBots' San Francisco headquarters a few days back, the company's co-founder Marek Michalowski was a bit hush-hush when it came to discussing the future of Keepon, not saying much beyond alluding to upcoming updates for the move-busting little 'bot. He was, however, more than happy to talk about hacking the beat-monitoring toy, something the company had in mind when it first designed the consumer-friendly toy. "We felt it was important to allow people to hack it and be able to do more things with the toy than it can do out of the box," Michalowski told us.

The company left the toy's I2C bus open, so interested parties can easily manipulate My Keepon by way of microcontrollers like Arduino and its ilk. We've already seen some crafty individuals get the robot to do their bidding, something that's only likely to increase when Michalowski releases a guide for hacking My Keepon in the very near future. In the meantime, click through after the break to see the robotics PhD discuss Keepon hacks. A YouTube full of choreographed "Thriller" Keepon videos surely can't be that far off.

In this article: arduino, beatbots, hack, keepon, MarekMichalowski, mykeepon, video
All products recommended by Engadget are selected by our editorial team, independent of our parent company. Some of our stories include affiliate links. If you buy something through one of these links, we may earn an affiliate commission.