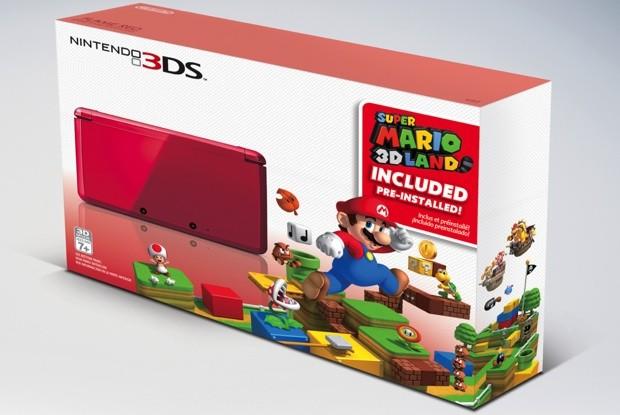 Just because Nintendo is focusing its energy on the Wii U launch doesn't preclude a sweet deal or two in portable gaming. Starting November 23rd, the company is bundling Super Mario 3D Land with Flame Red 3DS models at the same $170 price as the handheld by itself; it even comes pre-loaded on memory to save some of the hassles of physical media. You can be sure the limited-run console is all about goosing Black Friday sales at a time when Nintendo really needs the boost, but we don't think too many mobile gamers will mind if it means entering 3DS ownership with one of the platform's better games in hand.

REDMOND, Wash.--(BUSINESS WIRE)--Nintendo is giving early holiday shoppers a way to knock two items off their lists at once. Starting Nov. 23, a limited-edition version of the Flame Red Nintendo 3DS will come with Super Mario 3D Land pre-installed on the system. The bundle is offered at a suggested retail price of $169.99, providing an incredible value for holiday shoppers. If purchased separately, the system and the game would be offered at suggested retail prices of $169.99 and $39.99 respectively.

Since it launched, the Nintendo 3DS family of systems has sold nearly 6 million in the United States alone. The portable dual-screen system lets users see 3D images without the use of special glasses, while providing them with a wide variety of gaming and entertainment options. People can explore and purchase additional games in the Nintendo eShop, or watch the fun and funny 3D videos on Nintendo Video.

Super Mario 3D Land reinvents everything fans love about Mario gaming with the first platforming environment in true 3D. Players will experience an exhilarating new sense of depth, distance and speed while running, jumping and stomping on enemies throughout the levels. Mario can also use the tail of his Tanooki suit to swipe at enemies or float down from heights.

In this article: 3ds, blackfriday, bundle, gaming, minipost, MobileGaming, nintendo, SuperMario3dLand, VideoGames
All products recommended by Engadget are selected by our editorial team, independent of our parent company. Some of our stories include affiliate links. If you buy something through one of these links, we may earn an affiliate commission.