A deep-dive into the company's latest 3D handheld.

See that greenish blue thing up there? That might look like this greenish blue thing over here that we reviewed a few weeks back, but actually they're not the same. No, sir. This thing up there is the genuine, guaranteed, red-blooded American version, ready to tear a $250 hole in your gaming budget and make you go all googly-eyed for 3D. Naturally there isn't an awful lot different here compared to the Japanese version we already looked at, but we have had the opportunity to spend a good bit more quality time with this one than with the other one. Plus, being able to read all the manuals doesn't hurt.

What you'll find below is a full review of the American console including more game impressions, more in depth battery life tests, a dazzling demo of the thing's augmented reality gameplay, and some surprising performance results with good 'ol DS carts. So, join us, if you would, for a rather more in depth exploration of this, the next dimension in handheld console gaming. 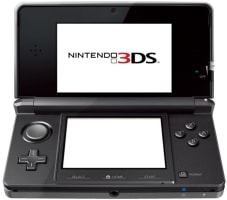 We don't have firm performance figures for the 3DS but it's clearly capable of better graphics processing than its predecessors. Obviously the original DS had no shortage of games rendered in 3D and, while the few 3DS we've seen thus far don't exactly make them look stone age by comparison, there's a definite step forward. Sadly, though, those 3D titles for the DS cannot make use of the display's trickery — they'll all be flat.

The 3DS also features both an accelerometer and a gyroscope. This enables augmented reality games like Face Raiders and some other nifty options we'll discuss in just a moment, but it's hard to not question the practicality of such games on this platform. Remember, you have to hold the 3DS in just that perfect spot, and so if you're moving around at all it just doesn't work.

Stereo speakers still flank both sides of the top screen, and they seem to handle slightly more volume and do it slightly more capably than the speakers in the previous DS models. We're still not talking high-fidelity here, though. Storage is achieved onto an SD card that slots in the left side. 2GB is provided, plenty enough to start, but should you find yourself going crazy with downloadable titles you can get yourself an 8GB monster for about ten bucks these days. Ain't progress grand?

Since spending time with many of the Japanese launch titles we've now been able to get to know a number of the American releases too. As ever we'll leave the detailed reviews to our pals at Joystiq, but here are some brief impressions.

Now it's time for the big question: is the 3DS worth the $249.99 that Nintendo is currently offering? That's a tough sell, especially knowing that in roughly 18 months we'll probably be looking at a thinner, lighter, prettier 3DS that offers better battery life and could be yours for a cheaper price. But, that's not here yet, and you have to ask yourself whether those 18 or so months of gameplay are worth whatever cash you'd potentially save by waiting a whole year and a half — or thereabouts

For cutting-edge gamers, particularly for big fans of Pilotwings, the 3DS is not a bad investments. The AR games are a lot of fun, for a little while at least, and the 3D effect is genuinely interesting. Some people recoil in horror long before their eyes have adjusted, but most folks who've tried the system really like it once they find their own personal sweet spot.

But still, it's a lot of money for a handheld gaming system with just over three hours of battery life, especially when you can get a brand new DS Lite for $130 that will last three times as long in a charge — and that comes in a rather more appealing set of colors. None of the launch titles are good enough to make the 3DS a must-buy for casual gamers, but if Nintendo can get Netflix lined up and, more importantly, if it can get third party publishers to really make use of the system's assets and not just release crummy ports, by the time this holiday season rolls around the 3DS could be a genuinely hot property — much, much hotter than Nintendo's last attempt at 3D domination.

Update: We made a slight tweak in the text above as we've had a chance to compare the two consoles and it seems like the US version has a slightly different hinge. The Japanese one was virtually silent and smooth but the US one is a bit more jarring and has a louder click with popping into place. It's a very minor point, but FYI just the same.