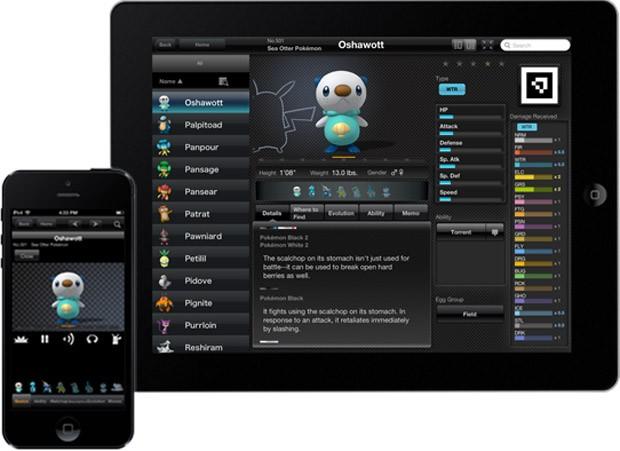 Nintendo may not be giving up its gaming IPs to smartphones just yet, but the Japanese gaming giant is willing to work with them if it means crosspromoting games on standalone Nintendo consoles. Take, for example, today's release of the interactive Pokémon "Pokédex," available for $2 across various iOS devices -- Nintendo clearly isn't against taking fans' money in exchange for a valuable service: information on over 640 Pokémon on-the-go ... if you buy the three upgrade packs for $5.99 apiece (!!), that is.

Support for the app extends all the way back to the aged iPhone 3GS, and through to the newest iPad (as well as the iPad Mini), so you'll be able to explore the wild world of Tepig from a vast array of iOS hardware. Of course, much of this could be meaningless to you if you grabbed the free version previously available on Nintendo's 3DS, but then you put it off, didn't you? And now here we are.

Official Data and Images for More than 640 Pokémon Are
at Your Fingertips with the Pokédex for iOS Application!
BELLEVUE, WA-December 10, 2012-The Pokémon Company International announced today that the official Pokédex application, an illustrated encyclopedia of more than 640 Pokémon characters, has arrived for the iPhone, iPad, iPad mini, and iPod touch[1], providing fans in North America and Europe[2] with a new and extremely helpful way to access comprehensive data about their favorite Pokémon. Fans can now download Pokédex for iOS from the Apple App Store and take an in-depth look into the world of Pokémon straight from their iOS device.

The wide range of data in the Pokédex for iOS application is conveniently accessible for each Pokémon character, giving fans invaluable information such as how to evolve a Pokémon, locations where specific Pokémon are found, and which types of attacks an individual Pokémon is weak against. The Pokédex for iOS is a must-have companion when playing Pokémon video games, including the recently launched Pokémon Black 2 and Pokémon White 2.

After downloading the official Pokédex for iOS [$1.99 USD], fans have immediate access to the Unova Pokédex (National Pokédex No. 494-647) and can quickly browse Pokémon either by name or by Pokédex number, move, Ability, or type. The application's intuitive interface allows users to sort Pokémon in numerous ways based on their distinctive characteristics. Once a user chooses a particular Pokémon, a detailed and dynamic 360-degree image of the Pokémon appears with a full encyclopedia entry, including its name, height and weight, type, Ability, and moves it can learn. Each Pokémon's entry includes the locations where the Pokémon can be found in Pokémon Black, Pokémon White, Pokémon Black 2, and Pokémon White 2.

Pokédex for iOS can be switched from English to French, Italian, Japanese, German, and Spanish. For information about the Pokédex for iOS application, please visit www.pokedexios.com.

In this article: gamefreak, ios, itunes, minipost, mobilepostcross, mobilepostmini, nintendo, thepokemoncompany
All products recommended by Engadget are selected by our editorial team, independent of our parent company. Some of our stories include affiliate links. If you buy something through one of these links, we may earn an affiliate commission.