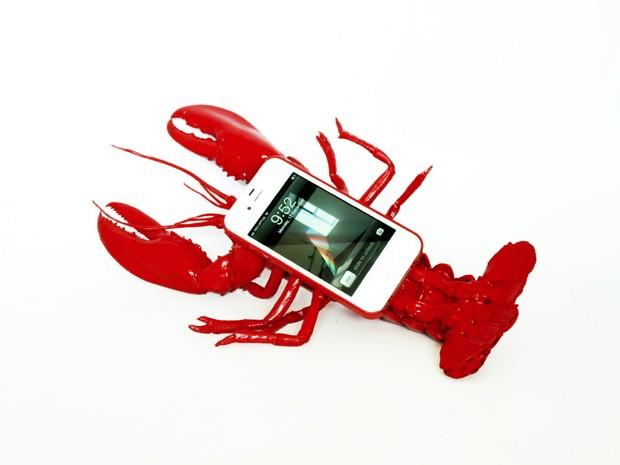 It's beginning to look a lot like Christmas. That's probably because it's Christmas. A time when the diet goes out of the window, everyone but you is wearing a hilariously ironic knitted sweater and the festive Crapgadgets rear their ugly heads. Yes, the sort of technology that tries to dupe unwitting relatives to buy you "something for your eyephones" from the bargain bin at Best Buy, this collection of aesthetic anomalies, taste travesties and electronic errors will have you praying for the cold, hard glare of January.

Read - Imagine, if you will, the eureka moment that inspired a designer to crate this iPhone case (seen above), based on Dali's lobster telephone sculpture. Then imagine their desire to sell it as a commercial product, despite the dramatically self-evident impracticalities contained therein. While the denizens of Williamsburg may buy these cases by the crateful, they'll probably run the risk of boiled smartphones from particularly zealous seafood chefs.

Read - When Jonathan Ive saw this Pyle old-timey iPhone dock, he probably broke down and wept, knowing that he had been finally beaten. This simple, $110 piece of reproduction furniture had undone every part of his mission for simplicity, and with that, he disappeared from the world.

Read - These are the rather euphemistically named "Romantic Xmas Lights Glove[s]," a pair of finger-warmers that light up at the tip and let you draw patterns for the night-time photographer in your life. We're not entirely sure what Brando's definition of romance is, but it probably means we need to get a new dictionary.

Read - The rocking chair may have fallen out of favor with the industrialized world, but this one's doing its best to keep up with the times. It's got an iPad dock, built-in speakers and a dynamo that'll give you 35 percent of your charge if you rock non-stop for an hour. Those innovations don't come cheaply, however, so be prepared to stump up nearly $2,000 for one.

In this article: Brando, Crapgadget, iRock, Lobster, Pyle
All products recommended by Engadget are selected by our editorial team, independent of our parent company. Some of our stories include affiliate links. If you buy something through one of these links, we may earn an affiliate commission.