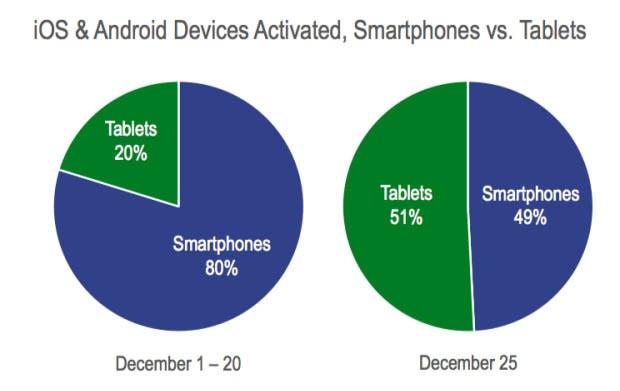 Assuming you were a non-naughty-lister who didn't get the proverbial coal lump, it looks like that gift under the tree was more likely a tablet than a phone this Noël, according to Flurry. The analytics outfit said that just over half of December 25th activations were slates, and we can't imagine too many gift-getters letting their new devices simlessly fester in a box over the big day. Overall activations more than doubled from last Christmas, and were up 332 percent on that single day from the first 20 days of December, combined. As might be expected, Apple came up big with iPad sales, but Flurry said that Amazon was also a winner with its 7-inch Kindle Fire HD tab, showing a "several thousand percent" increase over baseline activations. None of this likely comes as a huge shock to our readers, who rather overwhelmingly said that they'd rather have a Nexus 7 tablet than a pricier RAZR M as a gift if they toiled at Google.

In this article: 2012, activations, amazon, analytics, apple, christmas day, ChristmasDay, flurry, statistics
All products recommended by Engadget are selected by our editorial team, independent of our parent company. Some of our stories include affiliate links. If you buy something through one of these links, we may earn an affiliate commission.