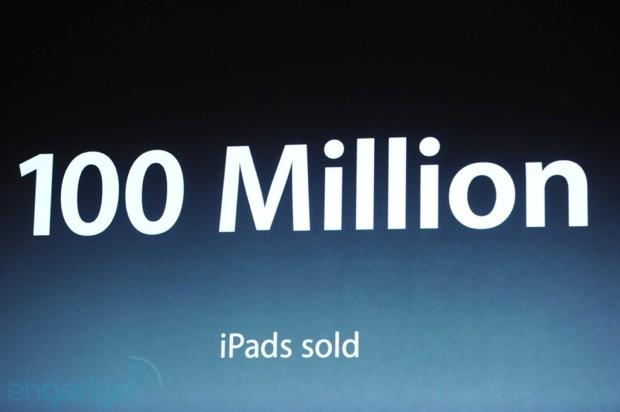 Just two and a half years after creating the product line, Apple announced today it has already notched its 100 millionth iPad sold. While we're still expecting to see a new, smaller model (get all the 4th gen info, including the new mini right here) unveiled today Apple is leading off its tablet talk with some chest thumping. According to its stats, it sold more iPads in the June quarter than any one PC manufacturers sold of their entire lineup, a hefty feat even if you take into account customers waiting for Windows 8. It's also referencing data that says the iPad accounts for 91 percent of web traffic among tablets. If that's not enough, there's also love for the education sector with a new version of iBooks author, which should get plenty of use with 2,500 schools in the US using them, and 80 percent of the curriculum available in iBooks.

In this article: 100 million, 100Million, apple, education, ibooks, ipad, sales, special event 2012, SpecialEvent2012, stats
All products recommended by Engadget are selected by our editorial team, independent of our parent company. Some of our stories include affiliate links. If you buy something through one of these links, we may earn an affiliate commission.