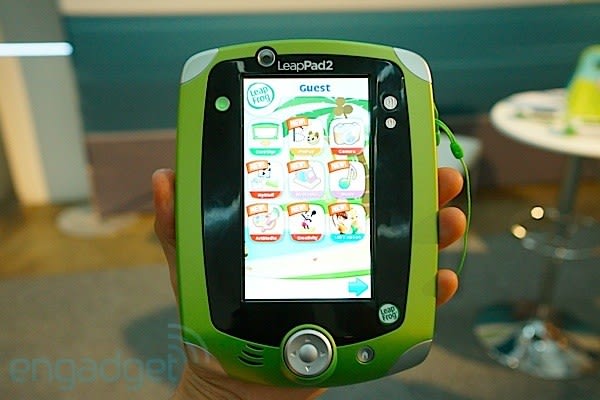 If you've got little ones of your own, you're probably familiar with LeapFrog's various learning devices for children. Since last year, the company stepped things up a notch by offering up its LeapPad tablet breed for youngsters and pricing it at just $100. Not only did it ensure you'd never have to your precious iPad loose into rigors of the adolescence (read: having it tortured by kids in unimaginable ways), but it also packed LeapFrog's developmental education know-how into all of its apps. If you'll recall, it was just yesterday that the company announced its second iteration of the device, the LeapPad 2, and today we were able to spend some time with near production-quality engineering samples. On that note, the same can be said of its latest Leapster, the GS Explorer -- a $70 Gameboy-like portable unit focused more on educational gaming. Join us after the break for a brief rundown of what's been improved and our initial impressions of both. While the LeapPad two looks nearly identical the original LeapPad Explorer, there are some notable enhancements. Moving around the device, all of the ports have remained the same and it still includes a stylus, but now there's a secondary front-facing 2MP video and stills camera for easier self-portraits (the rear shooter has also been upgraded to the same resolution). Aside from that, it still features an accelerometer and a resistive 5-inch touchscreen (480x272), but we're told that this time around the screen is less power-hungry. According to a LeapFrog rep, this allows for an extra hour of battery life from that of the previous generation. We did notice that the screen had a much warmer look to it, but we're told that the color-calibration is still being worked out. Internally, the unit now packs enhanced bracing for better durability, 4GB of storage (up from two) and a 550Mhz processor (up from 400). Sure those specs might seem weak up against the last smartphone, but its more than enough juice to run 325 (and growing) apps LeapFrog has for it, not to mention that the new unit really is noticeably quicker. Better yet, the device is now rated for youngins as little as three years old, and LeapFrog says it'll have software to match. In case you're wondering, there's still no wireless connectivity to be found, meaning tethering to your computer is a must for loading and off-loading digital content.

Moving right along, let's talk about that Leapster GS. The gaming system has seen a fairly extensive overhaul compared to its predecessor, and it all seems to be for the better. The device has increased in width, but it no doesn't have a bulky battery pack and certainly feels much better in the hands. The shoulder buttons have been pushed more to rear to be easier to press, while the action buttons and D-pad have better tactile feel and responsiveness. The screen's size has been increased to 3.5-inches (from 3.2, albeit no bump in resolution), but it's still resistive and functions either with your finger or an included stylus. The unit also features an included a 0.7 2MP shooter on back, allowing for similar functionality to that of the LeapPad 2. As you can see in the video above, the game Escape of the Sillies makes full use of all the system's features -- so much so that we were enjoying it much more than we'd like to admit.

Delving deeper into the issue of software, you'll be glad to know that both systems are essentially backwards compatible. So whether you were using cartridges or downloading apps (priced from five to 25 bucks) from LeapFrog's store, all of that content can go back and forth between the devices. That said, the LeapPad 2 comes pre-installed with the likes a new music player and a few creativity apps.

If you're ready to pick one up for your little one(s), both items are set to hit shelves in the middle of August in the UK, US, Canada and Ireland. Those eager to secure their own sooner however, can do so by pre-ordering the devices straight from LeapFrog on July 18th. Also worth note, both units AA batteries for power, and you'll also be able to pick up rechargeable batteries as add-ons. Last but not least, the LeapPad 2 will also be offered in Disney Princess-themed bundle that includes a case and other goodies for an extra 30 bucks. If you haven't already, check out the videos above to see the learning devices in action.

Source: LeapFrog
In this article: e book, e books, e reader, e readers, e-book, e-books, e-reader, e-readers, education, hands-on, leapfrog, leappad, leappad 2, Leappad2, leapster gs, LeapsterGs, learn, learning, school, slate, tablet, video
All products recommended by Engadget are selected by our editorial team, independent of our parent company. Some of our stories include affiliate links. If you buy something through one of these links, we may earn an affiliate commission.