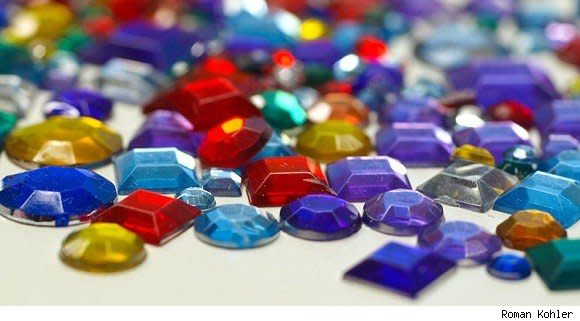 There are going to be some new important recipes in 5.2 for Jewelcrafters: a "prism" style daily cooldown Serpent's Heart, and a no-cooldown recipe that allows you to craft the uncut meta gems, Primal Diamonds, out of gems and Spirits of Harmony. Kaliope reports that both recipes are world drops in Pandaria on the PTR, and shouldn't take long to farm.

Serpent's Prism would have been a better name

While the profession is better designed than ever (with much less waste for shufflers and far fewer items ending up at the vendor), the Serpent's Eyes that you get while prospecting Mists ore tend to pile up. They're used to make the 450 crafted jewelry, but the market for that isn't nearly as large as the supply of Serpent's Eyes. Many people end up making these into blues and disenchanting them so they're not wasted.

Now that all JCs will have the option of turning three Serpent's Eyes into a prism every day, that will provide an outlet for the Eyes that may be more profitable than the 450 blues. So far, only a few Prisms have been opened, but they seem to award a random blue gem, just like prisms from expansions past. Since it's on a daily cooldown, it's unlikely to be able to push down the price of blue gems much.

Is it worth using Spirits of Harmony?

The new Primal Diamond recipe has no cooldown, but requires Spirits of Harmony which are their own sort of cooldown. One criticism of Jewelcrafting has been that JCs have nothing except research and extremely low-liquidity mini-pets to spend their Spirits of Harmony on. Jewelcrafters generate Spirits as quickly as any other character, and in theory, it'd be nice to have a JC option to use them on. Especially seeing as how anyone doing daily research will have almost certainly finished learning all their cuts by now.

That said, it may not be worth using the recipe as it stands now. Primal Diamonds are currently created by transmuting six blue uncut gems: two of each Wild Jade, Vermilion Onyx, and Imperial Amethyst. These three gems are the double stat gems, so in addition to having the highest number of different cuts available, some of them are ridiculously popular: I can't seem to keep Vivid Wild Jades (or Perfect Vivid Alexandrite, which is just as good) in stock. That makes the current price for Primal Diamonds rather high, since I have to choose between cutting and selling a very popular gem and making a meta gem.

Since 5.1, the prices on Golden Lotus have dropped far enough that transmuting the gems needed for the meta gem transmute has been profitable, however the underlying cost remains the same. Every time I transmute a Lotus, I need to decide whether I'll make more money cutting it or folding it into a meta. Assuming you use a transmute specced alchemist:

Compare this to the new Primal Diamond recipe, which will require 5 of each uncut green gem: a stack of 20 would require 600 green uncut gems and 20 Spirits of Harmony. Depending on what you do with your green gems, this may or may not be worth it at all.

One common thing to do with green gems is make greens for disenchanting or vendoring. One of each color green quality gem (also known as the average yield from a single stack of Ghost Iron Ore) makes two greens, one ring and one neck. These have a 10% chance of proccing a 415 blue with a random enchantment that can be used as low as level 85. The blue Ornate Bands sell for an average of 100g on my realm, and the blue Shadowfire Necklaces are closer to 50g (with many of them ending up disenchanted).

If you use one of each green gem to make two items and vendor them both, you just made about 20g. If you make 600 green gems worth of them (which is what you could have done instead of making a stack of meta gems), you'll usually end up with 20 blues and 180 greens. On my realm, those blues are worth 2000g total, and the greens are worth either 1800g at the vendor, or double that (3600g) as enchanting materials. Your mileage will, of course, vary (unless you're on my realm).

In short, in order to make that stack of meta gems, you can either:If the money you're losing from not buying Lotus with your Spirits of Harmony is 2000g and you can make 5600g from those 600 green gems, using the new recipe costs you 7600g for a stack of meta gems.

If you buy 83 lotus from the AH for 4150g and the 83 green quality gems you'd use with the transmutation method are worth 775g, a stack of meta gems cost you just under 5k gold without the new recipe. I am glossing over the fact that you only need three colors of gems for this method, rather than an equal number of all colors consumed by the spirits. Since we can only compare for "small" quantities (it takes a long time to farm Spirits of Harmony), dealing with the imbalance generated by this doesn't take a lot of time.

If the price of Lotus is lower, it favors the new recipe even less, however if enchanting materials are dirt cheap, it may favor the new recipe. If instead of making 5600g from those green quality gems, you can only make the vendor floor from them (2000g assuming you vendor the blues), you would have to recalculate. That said, this recipe uses Spirits of Harmony. It's supposed to be unambiguously good, not good on some realms sometimes.

Maximize your profits with advice from Gold Capped. Want to know the very best ways to earn 10,000 gold? Top gold making strategies for auctioneers? How about how to reach 1 million gold -- or how one player got there and then gave it all away? Fox and Basil are taking your questions at fox@wowinsider.com and basil@wowinsider.com.
In this article: auction-house, crafting, gold, gold-making, jewelcrafting, kaliopes-wow-crafting-blog, meta-gem, mists-of-pandaria, patch-5.2, patch-5.2-ptr, primal-diamond, prism, research, Serpents-Eye, serpents-heart, serpents-prism, spirit-of-harmony
All products recommended by Engadget are selected by our editorial team, independent of our parent company. Some of our stories include affiliate links. If you buy something through one of these links, we may earn an affiliate commission.