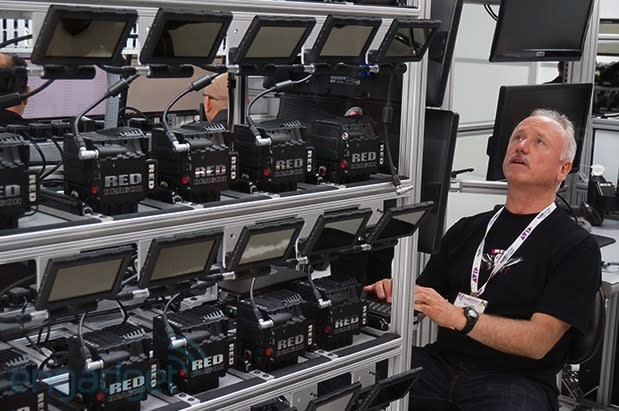 Well, this is a trade-show first. Red Digital Cinema has made a name for itself by pushing the limits when it comes to motion picture camera technology, but the company's "get it done" approach is even evident in the layout of its trade show booth this year. The team has constructed a full sterile lab here at NAB, where attendees can watch technicians upgrade Epic cameras with the new Dragon 6K sensor, which enables 6K shooting at 6144 x 3160 pixels and up to 100 frames-per-second, offering three additional stops over the Epic M-X. A wall of glass separates fans from the engineers in the clearly visible clean room, who are diligently going about their duties despite the constant gaggle of excited customers just a few feet away. Company spokesman Ted Schilowitz gave us a quick tour of the facility, where the $8,500+ sensor upgrades are now underway. Geek out with us in the video just past the break.

In this article: 4k, dragon, hands-on, nab2013, red, red camera, RedCamera, sensor, upgrade, video
All products recommended by Engadget are selected by our editorial team, independent of our parent company. Some of our stories include affiliate links. If you buy something through one of these links, we may earn an affiliate commission.