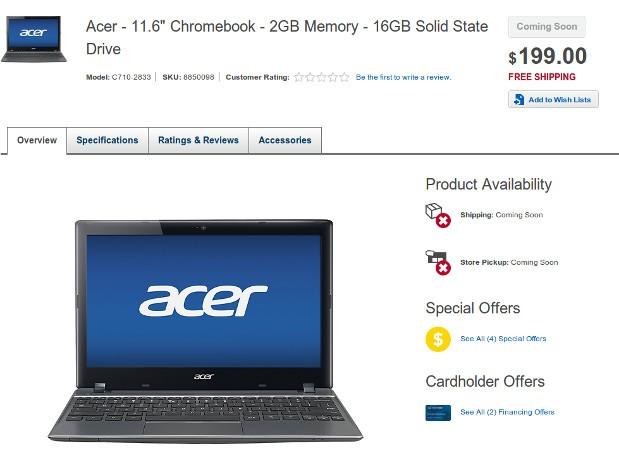 Acer's C7 Chromebook is the cheapest way to get in on Google's cloud-OS party. But, it still ships a 320GB 5,400RPM drive. Truth be told, such a large amount of local storage is counter to the whole idea of Chrome OS -- not to mention that the slow spin introduces a certain amount of unwelcome lag. Thankfully the bargain-basement $199 laptop is about to get an SSD makeover, according to a listing at Best Buy. The official specs at the Google Play store still list the standard hard drive, but the big box shop has a model featuring 16GB of solid state storage. The updated C7 keeps the same affordable price point, though we have no idea when it might start shipping. Best Buy lists the Chromebook simply as "coming soon," with no estimated delivery date. From what we can see there are no other changes to the machine, so if you weren't a fan of the cheap construction before, don't expect that to change.

In this article: acer, AcerC7, AcerC7Chromebook, BestBuy, c7, C7Chromebook, chromebook, chromeos, google, ssd
All products recommended by Engadget are selected by our editorial team, independent of our parent company. Some of our stories include affiliate links. If you buy something through one of these links, we may earn an affiliate commission.