Acer C7 Chromebook review: Chrome OS on the cheap, but at what cost?

It's been just over a month since Google unveiled its gorgeous and affordable $249 Samsung Chromebook only to surprise us days later with an even cheaper system, the $199 Acer C7 Chromebook. At first glance, these two laptops are very similar, both in purpose (cloud-based computing on a budget) and in specs (11.6-inch display, dual-core CPU, 2GB of RAM), but there are significant differences under the hood. Samsung's offering achieves its svelte form factor, 6.5-hour battery life and attractive price via a fully integrated and fanless ARM-based design while Acer takes a more conservative approach -- cramming standard off-the-shelf components like a 2.5-inch hard drive, small-outline memory module, mini-PCIe WiFi card, and Intel Celeron processor into a traditional netbook-like chassis. Does being $50 cheaper make up for the C7's lack of sex appeal and short 4-hour battery life? What other compromises in performance and build quality (if any) were made to achieve this lower cost? Most importantly, which budget Chromebook is right for you? Find out after the break. 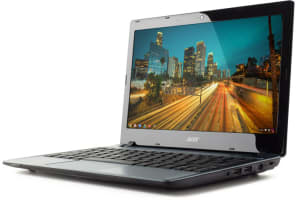 Whereas Samsung's $249 Chromebook is purpose-built and inherits most of the finer design attributes of its larger, faster and more expensive cousin, the Series 5 550, Acer's $199 Chromebook looks and feels like a cheap netbook. In fact, other than the Chrome logo and OS-specific key labels, you'd be hard-pressed to tell the C7 apart from its twin, the company's 11.6-inch Aspire V5. Build quality and materials are on par with other low-end Acer systems we've come across -- cheap molded plastics abound, making this laptop sturdy but not particularly elegant. If Samsung's Chromebook evokes the 11-inch MacBook Air, the C7 is completely generic and purely utilitarian. Beyond the obvious aesthetic differences, Acer's Chromebook is also thicker (one inch vs. 0.7 inch) and heavier (three pounds vs. 2.4).

The screen lid and keyboard deck are painted "iron gray" while the bottom shell is made of textured black plastic and the display bezel is finished in shiny black. Strangely, each of these disparate surfaces manages to attract fingerprints to various degrees. Acer's brand is stenciled below the glossy 11.6-inch screen and in the middle of the lid. The Chrome logo is embossed in the top-left corner of the lid -- it's actually a sticker which started peeling off within minutes of us unboxing the C7. You'll find a webcam and microphone above the display and the power button with an embedded blue LED above the keyboard to the left.

Speaking of which, the keyboard uses black island keys but differs in layout from other Chromebooks, which is problematic (more on this later). The left side is home to a 10/100 Ethernet jack, VGA and HDMI outputs, plus a USB 2.0 port, while the right side features a Kensington lock, the power connector, two more USB 2.0 sockets and a standard 3.5mm headphone jack. In front, there's an SD card slot on the left and a pair of blue / orange status LEDs (sleep and charge) on the right. The removable four-cell Li-ion battery slips into the back of the system and is secured via a sliding lock mechanism accessible from the bottom.

Flipping Acer's Chromebook over reveals a few vents and grilles for the cooling fan and the speakers. What's more interesting is that the bottom shell is largely covered by a plastic door that's fastened with a single Phillips screw located under the warranty seal. Opening this door provides access to a 7mm-thin 2.5-inch SATA hard drive (320GB / 5400rpm) made by Seagate, two DDR3-1066 / 1333 SoDIMM slots (one of them populated with 2GB of RAM) and an Atheros half-height mini-PCIe 802.11a/b/g/n WiFi card (but no Bluetooth). This, combined with the Ethernet jack, VGA output and additional USB 2.0 port makes the C7 a lot more tinker-friendly than Samsung's Chromebook. In fact, resourceful hackers are already dual-booting Chrome OS and Ubuntu 12.04 on this laptop -- we're sure Windows 8 is not too far behind.

First, the keyboard deviates from the standard Chromebook layout by losing the power button (it's separate) and including caps-lock (instead of the search key). Second, it's cluttered with vestigial keys (such as Home, End, Ins, Del) which are too small to be useful and in some cases (like Pg Up / Dn) interfere with the cursor keys, something that quickly makes editing documents extremely frustrating. Third, the Ctrl and Alt keys are too small and are separated by other keys on the left side, while the Alt key is missing on the right (replaced with Alt Gr). Once you're past these niggles, it's a serviceable if somewhat mushy chiclet keyboard.

Acer's trackpad almost matches Samsung's. Single-finger tracking and two-finger scrolling work as expected but pressing to click requires more force, which becomes tiring after using the C7 for a while. Of course tapping to click is available in the settings, but we prefer the tactile feedback of a properly calibrated switch.

There's one major difference between the 11.6-inch, 1,366 x 768-pixel LED-backlit screens on these two budget Chromebooks -- Acer's is glossy and Samsung's is matte. In fact, this is the second Chromebook ever with a shiny display (the first being Acer's AC700). Colors are slightly cooler on the C7, but brightness, contrast and viewing angles are similar on both screens -- neither is as bright as the Series 5 550, and you'll probably want to adjust the lid for the best viewing angle once you're in a comfortable position. While Samsung's matte display is easier on the eyes (especially when working outdoors), Acer's screen opens almost flat, which is a nice touch.

Neither Chromebook is going to break any records in terms of audio quality when using the built-in speakers. These sound tinny and are easy to obstruct, being located in the bottom shell near the front edge of the keyboard deck on both systems. Samsung beats Acer on loudness here, but the C7's volume is still adequate in a quiet room.

Acer's Chromebook, which is rated for four hours of operation, lasts only three hours and 16 minutes in the same test.

Acer's $199 Chromebook features Intel's 1.1GHz Celeron 847 processor and a 320GB hard drive. Samsung's $249 Chromebook is built around the company's A15-based 1.7GHz Exynos 5 Dual (5250) SoC with 16GB of flash storage. Both laptops sport a dual-core CPU and 2GB of RAM, so it's really a battle of x86 vs. ARM and HDDs vs. SSDs. On Chromebooks, the processor speed usually affects things like page rendering and scrolling, the amount of RAM impacts how many tabs you're able to open at the same time, and storage performance generally affects boot times and page caching

In our experience, Samsung's Exynos-packing system slots somewhere between the Atom-equipped Chromebooks and the Celeron-based models like the Series 5 550. Of course, those are all equipped with solid-state drives. The C7, then, is an anomaly -- it's marginally faster than its budget stablemate, both subjectively and as reflected by SunSpider web rendering results (528ms vs. 677ms), yet it takes twice as long to boot (18 seconds vs. nine). We don't remember noticing any hiccups or crashes -- as such, it's a perfectly competent Chromebook that provides middle-of-the-road performance.

Battery life is another matter. Samsung's Chromebook comes out ahead by matching its specs and scoring six hours and 33 minutes in our usual battery rundown test (which involves playing a video in a loop from local storage with WiFi turned on). Acer's Chromebook, which is rated for four hours of operation, lasts only three hours and 16 minutes in the same test. While the C7 features a smaller 2,500mAh battery (vs. 4,080mAh), it's also saddled with less-efficient components, like that 2.5-inch hard drive, the Intel Celeron CPU and its associated cooling fan. Speaking of which, the fan is always spinning, and while the speed varies, it's often loud enough to be noticed. While it's somewhat annoying, it keeps the laptop cool even when the vents are partially covered by fabric.

For many, Chrome OS is an acquired taste -- you really have to live with it for a few days to appreciate it. While it's not for everyone, it's a compelling option once you wrap your head around the idea. There's a certain beautiful simplicity to cloud-based computing that becomes clear once you start using a system designed to do only one thing really well -- the one thing people do the most -- surf the web. No more worries about managing apps or updating software or lending your laptop -- you're able to focus and be productive. We have several fans in our midst here at Engadget, and this pair of budget Chromebooks is generating more interest than ever among colleagues, friends and family.

Acer's $199 Chromebook runs version 23 of Chrome OS. We reviewed build 19 earlier this year, which marked a significant change for the OS -- the UI evolved from being pretty much a full-screen instance of Chrome to offering a more desktop-like experience, complete with wallpapers, a task bar and a launch menu. It also introduced additional functionality with a photo editor, broader media compatibility, offline documents including Google Books, support for Hangouts, plus tab synchronization with other versions of Chrome (mobile and desktop). That build of the OS also comes with Chrome Remote Desktop to access remote systems and share your own screen. Version 23, which also ships on Samsung's $249 Chromebook, features a revised log-in screen, additional wallpapers, a calculator app, a camera app (with funky filters) and deep Google Drive integration -- complete with 100GB of free storage for two years.

Whether you're interested in cloud-based computing on a budget or you're just curious about Chrome OS, there's never been a more affordable selection of Chromebooks. Acer's $199 system certainly wins on price, but it looks and feels extremely cheap. It offers a fast processor along with Ethernet and VGA connectivity, but at the expense of a glossy screen, poor keyboard layout and lackluster battery life. Did we mention the sea of cheap plastics?

Still, it's hard to ignore the C7's tinker-friendly ways. Adding another 2GB of RAM (by installing a second SoDIMM) and replacing the hard drive with a small SSD is a trivial way to achieve Series 5 550 levels of performance for less money than buying Google's flagship laptop -- not to mention, this Chromebook's already been hacked to run other operating systems. Plus, the removable four-cell Li-ion battery opens the door to larger-capacity replacement packs.

Ultimately, we think it's worth spending a little extra for Samsung's $249 model. It's more elegant, better built, thinner and lighter. This, together with the matte display, top-notch keyboard, Bluetooth and decent battery life makes for a more polished Chromebook experience. After all, if you're gonna live in the cloud, might as well be on cloud nine, right?