When Wacom teased a tablet-sized device a few months back, our curiosity was immediately piqued. However, the next reveal from the pen-wielding-peripheral company was actually the Cintiq 13HD -- a product more in line with the outfit's existing displays. We guess we'll just have to keep waiting patiently for that truly mobile input device. For now, though, the 13-inch pen display sports that tablet form factor, but remains a dedicated tethered peripheral for artists, designers and photographers. While the device still offers the capable, user-configurable ExpressKeys and mighty Cintiq pen, are the omission of touch gestures and the need to remain wired to your desktop or laptop dealbreakers? Read on to see what we discovered.%Gallery-189988% 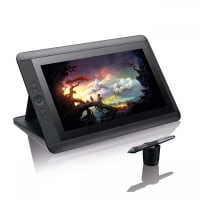 At first glance with the screen off, the Cintiq 13HD could pass for a medium-sized Intuos5 touch. Upon closer inspection, though, you'll see it offers a room with a view on its semi-gloss, pen-enabled surface. Wacom's newest gadget remains draped in an all-black coating, while a slightly smaller set of ExpressKeys, surrounding a single Rocker Ring and a centered home button, lines the bezel to one side of the display panel. Once again those controls have a soft-touch veneer, offering a comfy place to rest your weary fingers during an intense work session. Raised bumps on a few of those toggles allow you to get your bearings without having to glance over at your digits, too. A power button, USB 2.0 port, 3-in-1 cable jack (more on that later) and LED status indicator sit on the other end, opposite those user-configurable buttons.

Around back, there's a panel of the same soft-touch material embossed with the Wacom logo that covers a portion of display and two squares of it on the opposite end. A pair of slots for the included stand can also be found on the backside. In terms of size, the Cintiq 13HD measures 14.75 x 9.75 inches (375 x 248mm) and is about half an inch thick overall, but the display or "active" area ticks the tape at 11.75 x 6.75 inches (299 x 171mm), or 13.3 inches diagonally. Those dimensions make this pen display slightly portlier than Toshiba's Excite 13, if you're looking for a size comparison with a full-fledged 13-inch tablet. It also weighs more too, tipping the scales at 2.65 pounds.

Included in the box -- just like with the larger Cintiq offerings, albeit much less robust this time around -- is a stand for anchored use. The black-and-silver accessory offers notches for those built-in slots on the back of the 13HD, with a dash more of that soft-touch material to help keep scratches to a minimum and to ensure the thing doesn't slide around on top of your desk. The stand has separate inserts for 22-, 35- and 50-degree viewing angles and will keep the display stationary in a completely flat orientation as well. That said, adjusting the angle here is a bit more of a chore than we saw with the lever pushes on the massive 24HD touch. Of course, this is by no means required and a stand-less, in-lap work session is also an option.

Remember that 3-in-1 port? Well, as you might expect, there's a dedicated cable for that bad boy. On one end, there's a single connector that resembles Apple's 30-pin option for the 13HD and on the other, the cable splits into three separate connections for USB and HDMI on your computer of choice, and the AC adapter. That's right, folks: if a Mini DisplayPort or Thunderbolt jack is your weapon of choice, you'll need to purchase an extra $35 adapter (we nabbed a Belkin accessory at our local Apple Store), just like we had to do for the Cintiq 24HD touch. That makes two Cintiqs in a row that we've had to venture out for an extra piece in order to get up and running. Bummer.

The main attraction on the Cintiq 13HD is easily the display panel. The screen measures 13.3 inches (338mm) with a resolution of 1,920 x 1,080 for full HD viewing at a smidge over 165 pixels per inch. Wrangling 75 percent of Adobe's RGB gamut, the panel sorts 16.7 million colors and offers 250 cd/m2 of brightness. "Semi-gloss" probably describes the surface best as it provides just the right amount of sheen without tossing back too many reflections from outside lighting. Viewing angles are also quite stellar and we didn't notice the wee bit of depth between the exterior surface and the pixels beneath that we observed on the 24HD touch's screen. Also, close-up work sessions didn't reveal visible pixels like they did on its behemoth sibling -- quite a welcome improvement there. Overall, we're much more smitten with the display quality here than on the larger pen peripheral, as the sharpness greatly improves detailed design work and tedious photo editing.

While the highly capable Cintiq pen does get a bit of an exterior makeover this time around, internally things are largely the same. The 2,048 levels of pressure sensitivity (on both the pen tip and eraser) and soft-touch grip that we enjoyed on the Intuos 5 touch and the Cintiq 24HD touch are here once more. There's still a holder for resting the stylus in an upright position that houses 10 nib replacements, too. However, the pen itself now sports a dapper two-tone, silver-and-black scheme with a dash of chrome around its on-board buttons. It also arrives resting in its own separate case alongside those extra pen tips and color rings for keeping one pen easily identifiable from that of a fellow cubicle dweller.

Before the real fun starts, a quick driver install is required. While a CD with the requisite installation files is included in the box, those living dangerously without an optical drive (like some of with our MacBook Airs) will want to navigate to Wacom's website to snag the software. Once that's done, connect the cables to both the 13HD and your computer, find a nearby power strip and the hard work is done in less than five minutes -- save for configuring those customizable buttons on the bezel, of course.

Those familiar with Wacom's pen-enabled devices know exactly what to expect here.

Those familiar with Wacom's pen-enabled devices know exactly what to expect here. The performance of the 13HD is consistent with both the Cintiq and Intuos lines as far as stylus-aided input goes. Instances of lag between the pen and the cursor were few and far between in our tests with CS6 applications (mostly Photoshop and Illustrator). Just like we saw with the Intuos5 touch and Cintiq 24HD touch, those configurable keys lining the side come in handy for oft-used shortcuts and save extra movement with your pen / mouse hand. When used without the stand, the smaller ExpressKeys feel quite comfortable on the bezel. Once again, on-screen HUD reminders appear by default once a new tool is toggled and Radial Menus allow eight separate actions to be accessed with a single button. %Gallery-189987%

We found ourselves constantly attempting to revert back to the touch-enabled ways we got used to with the Intuos5 touch and 24HD touch. It's not so much that the reduced real estate for our art boards makes for a cramped setup, but that we find it natural to be able to pinch-to-zoom and rotate items with our ExpressKey fingers in the heat of the moment -- especially on a slate-sized display. This addition would also expand the programmable options, too -- multi-finger swipes and more would then come into play. For now, though, we have to force ourselves not to leave that soft-touch bezel, taking away a Fig Newton every time we do.

If there were a wireless option available here, this Cintiq would certainly jump to the top of our shopping list.

While the stand's viewing angles are adequate for most jobs, we really wanted to fix the panel just so in certain cases to get a more comfortable perspective. Of course, one way to do this is to remove the 13HD from its stand entirely and use it more like a tablet. Don't get us wrong, the size and weight make this a comfortable pursuit, but the fact that a fairly hefty cord must remain affixed to one end makes the in-lap or hand-held orientation less appealing. If there were a wireless option available here, this Cintiq would certainly jump to the top of our shopping list.

In terms of Wacom's pen-enabled displays, the Cintiq 13HD is the most affordable option at $999. If money really is no object, the 22HD touch (our thoughts on that are coming up in an IRL entry) and the 24HD touch offer significantly more real estate for that digital workbench, plus the ability to use your non-pen hand for swipes and other gestures. If you'll recall, though, we found those touch functions to be moderately useful on the larger display. You'll have to shell out $2,699 (22HD touch) and $3,499 (24HD touch) for each of those, of course. For those simply seeking more work space, non-touch versions of both the 22HD and 24HD will set you back $1,999 and $2,599, respectively.

Not sure about spending a load of cash on a pen display? Already have a display that you're quite fond of anchored at your workstation? Well, might we suggest the Intuos5 touch. The pen tablet is available in three sizes (we are quite fond of the medium option) and allows you to keep your eyes on the prize with its on-screen HUD reminders for Touch Ring and ExpressKey toggles. This peripheral also touts that wireless capability that we so covet, but it requires the purchase of an extra kit to cut the tether. These range in price from $229 to $469.

While the tablet form factor has a number of upsides for those looking to dive into the pen-enabled display pool, the Cintiq 13HD leaves us wanting more. Generally speaking, the performance is right up there with what we'd expect from a Wacom display (and definitely a welcome replacement for the Cintiq 12WX), but the missing bells and whistles give us pause. We're still trying to break our habit of touch-powered swipes and zooms during work sessions and the hefty cable made attempts to break from the stand's four configurations a burden. Sure, we can see the issues with including wireless connectivity here, but with a $1,000 price tag, that capability would certainly soften the blow to any wallet. Heck, we'd even be willing to pay a smidge more to be able to discard the cords.

Perhaps what we're really asking for is the full-fledged tablet that was teased back in March. The ability to work wirelessly tethered to a laptop or desktop machine with the option to take a slate-style device on the go is quite a compelling thought. We're well-aware that issues would arise -- like rechargeable batteries and built-in storage -- but for prosumers, Wacom is well-suited to take the leap. Secondary-display apps for iPad and Android tablets simply don't offer anywhere near the customization -- and performance, for that matter -- that these peripherals do to speed up labor-intensive workflows. For now, though, we have a 13-inch pen display that's a quite capable connected peripheral for those not looking to refinance their mortgages for a Cintiq 24HD touch. And if the company continues to follow its recent pattern, a touch-enabled version could be right around the corner. Nixing one of our biggest gripes would certainly cause us to reconsider.