A few weeks ago, Wacom started shipping a new version of its Cintiq 24HD pen display for creative pros that first broke from cover last September. The appropriately named Cintiq 24HD touch carries virtually the same outer styling as the OG model. An ergonomic base still cradles the massive 24-inch screen and can be configured to your particular seating preference. On the inside, though, there's a host of changes. As the name suggests, the major difference between the two is the addition of multi-touch controls to the more recent offering. However, the added functionality does come with a pretty hefty price tag, as the Cintiq 24HD touch costs $1,100 more than its elder sibling. Are the additions of touch gestures and an improved display panel enough to justify forking over the extra coin, or will the less expensive option work just fine in a studio setting? Read on to find out as we tackle that very question. 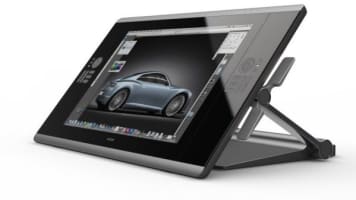 As we've already mentioned, the Cintiq 24HD touch has much the same design as the previous, non-touch offering. In fact, the only difference you'll notice is that the controls at the top of the display's face have changed -- and that's if you're looking closely. These buttons now toggle touch functionality on / off, bring up an on-screen keyboard and display ExpressKey / control reminders. One thing that hasn't changed: the weight. Undoubtedly, the first thing you'll notice is the mass of the 62.9-pound (28.6 kg) kit. If you happen to forget about this bit of information, your courier will be quick to remind you when it arrives. When you tack that figure on with the 30.3 x 18.3-inch (769.3 x 463.74mm) surface area that also remains relatively unchanged, you'll find a substantial amount of space will need to be dedicated to the high-end peripheral. In other words, once you find a resting spot, you'll think twice about relocating.

One thing that hasn't changed: the weight. Undoubtedly, the first thing you'll notice is the mass of the kit.

Let's chat about the base for a bit, shall we? This unit rests atop an enclosed black box that hides all of the requisite cables from sight. Cables head into the back of the base and connect beneath two user-removable panels on both sides of display's back -- making the only visible port the lone USB connector on the left side of the front. Metal arms reach up from the black platform and sport two pairs of hinges for adjusting the viewing angle. The first set is level with the base and allows the device to rotate forward, toward the user. A second sits on the side of the display and can be used to rotate the panel between being parallel with your desk to sitting perfectly perpendicular to it. Large handles on the 24HD's sides control the latter adjustment while a release that's situated on the base allows for the former. The aforementioned arms are the only two parts of the device that aren't shrouded in black, providing an aesthetic accent to the rest of the behemoth.

Moving on to the business portion of things, the 24-inch H-IPS panel, we'll begin to encounter the new features of the Cintiq 24HD touch. Again, on the surface, the display appears to be an exact replica of the previous version. A set of programmable ExpressKeys rest on either side of the ultra-wide bezel and a single Touch Ring is included with each. Resting along the main display are two Touch Strips, too. You still won't find any printed-on labels here, as all of that information remains on-screen like we've encountered on the regular 24HD and the Intuos5 touch. Speaking of the extra real estate around the outside, what may seem like a waste initially is actually a nice place to rest forearms and elbows when you're in the heat of a Photoshop editing session. We quickly decided that the added space was a welcome addition indeed.

The unit's display panel sports a few added features (in addition to the touch gestures) that give it a bit more of an advantage over the first Cintiq 24HD. First, this pen-enabled device covers 97 percent of Adobe's RGB gamut. That's up from 92 percent on the previous release and accounts for 1.07 billion colors. Resolution remains at 1,920 x 1,200 for the 16:10 display, with 500:1 contrast and a 178-degree viewing angle in tow. It's still a matte-coated affair that we found to be quite accommodating to our red-eyed stares for hours on end during the course of this review. Well, as cozy as gazing upon a screen for long periods of time can be.

We found the matte-coated affair to be quite accommodating to our red-eyed stares for hours on end.

Truth be told, the color production on the display is quite nice. Brightness controls can be jacked up to 300cd/m2, offering a wide range of adjustment to fit the lighting in your workspace. Sitting so close to the display during out tests, we definitely noticed individual pixels. But let's be honest, when your peepers are situated mere inches away from the screen, those tiny squares are going to be easy to see -- even on an H-IPS device.

If it ain't broke, don't fix it, right? That's the approach that Wacom has taken with its tried-and-true pen. The same input device that we spent some quality time with alongside the Inutos5 touch a few months ago is also included with the Cintiq 24HD touch. It still comes with 10 replaceable nibs that are housed inside a holder for the pen when you're not digitally painting your next comic series. Internally, 2,048 levels of sensitivity are at work and the top end retains its eraser duties by default.

After bribing a couple of your best mates to help you raise this behemoth out of the box, the hard work is over. From there, it's two connections (USB and DVI) to your work machine and you're a driver install away from on-screen sketching. Keep in mind that you'll need a $30 adapter for the DVI cable in order to connect to a Mac's Mini DisplayPort or Thunderbolt jack. The entire process took us less than 10 minutes before we were able to fire up Photoshop. Of course, this is if you're willing to hit the ground running with Wacom's default settings for the ExpressKeys and touch gestures. One thing you will want to do is calibrate the pen so that all of the action happens directly under the tip. This adjustment only takes a few minutes and will save you loads of frustration.

Configuring all of the ExpressKeys, multi-touch swipes and pen actions is easily done in the System Preferences panel under Wacom if you're on a Mac (we used a MacBook Pro for our tests). Here, you'll find access to all of the functions that a button, finger or pen click can control. You can also sort all of your application-specific commands here as well. Looking to add to your software library? The Cintiq 24HD touch includes full versions of Adobe Photoshop Elements, Anime Studio Debut, Nik Software Color Efex Pro 4 Select Edition and a 90-day trial version of Corel Painter 12. During our time with the display, though, we made use of Adobe Photoshop CS5 and the Corel Painter 12 trial in order to put the unit through its paces.

Touch gestures and general use

While the multi-touch functionality provided some useful shortcuts during our work sessions, any action that required more than two or three fingers became quite cumbersome. The most useful gestures were two-finger actions: pinch to zoom in / out and rotating the canvas. These two commands worked almost flawlessly and kept us from having to reach a short distance to the ExpressKeys to move around the file. When we needed a tool or action that required more than two fingers, though, our results were much less enjoyable -- much like we saw with the Intuos5 touch. Eventually, we found ourselves programming all of the gestures used most often to the two-finger settings and leaving the rest to very limited use. Using our non-pen hand to man the controls along the bezel while moving in to zoom or rotate became our preferred setup.

The most useful gestures were two-finger actions: pinch to zoom in / out and rotating the canvas.

As expected, the pen functionality with the Cintiq 24HD touch worked flawlessly. We encountered performance similar to what we saw with the Intuos5 touch, making our work sessions quite enjoyable. We found that the pen input eased tasks like photo editing, hand-rendered typography and any chore that required a brush. Speaking of brushes, you'll notice all of those 2,048 sensitivity levels at work with a digital paintbrush or a tool that's used to tidy up a few images in Photoshop.

If the hefty price tag immediately turns you away from the Cintiq 24HD touch, there are a couple of other options from Wacom that are a bit easier on the ol' wallet. As we've already discussed, the non-touch version of the 24HD is still available and -- aside from the lack of multi-touch functionality and a handful of improvements to display panel itself – knocks an aforementioned $1,100 off the final price ($2,599). The outfit also offers the recently announced Cintiq 22HD pen display for $1,999; however, the base / stand isn't nearly as accommodating (despite its ability to rotate) as the one we've handled here. It also touts a 21.5-inch LCD instead of the H-IPS panel that the 24-inch offerings make use of.

It should come as no surprise that the pen functionality on a Wacom display or tablet is going to be stellar -- especially on the high-end kits like we spent time with here. We never encountered a hiccup with the pen functionality, and having all of those pressure levels at your disposal should be a major improvement over a regular mouse, to say the least. However, given the fact that we only really made use of a few touch gestures once we settled in, we're not so sure spending the extra cash for the touch model is worth it. Of course, the two-finger zoom and rotate actions are quite convenient, but we would like to see the same consistency in those that call for four or five fingers as well. Aside from a few improvements to the display panel, touch functionality is really what distinguishes the two and we aren't convinced that the additional $1,100 is a sound investment.

Multi-touch gripes aside, both the Cintiq 24HDs are stellar peripherals for any design professional. The ability to draw directly on screen in a host of applications shaves valuable time off of most creative tasks and offers more precise control than moving a mouse around on your desk. Another huge plus for these pen displays is the ability to maneuver the unit into just about any position you could imagine to make sure that you stay comfortable while burning the midnight oil. The ergonomic base / stand has as much to do with our affinity for these two as the displays themselves. Even if you don't splurge for the touch-enabled model, these 24-inch displays from Wacom should definitely be on your shortlist when the time comes to make a big purchase for that new studio.