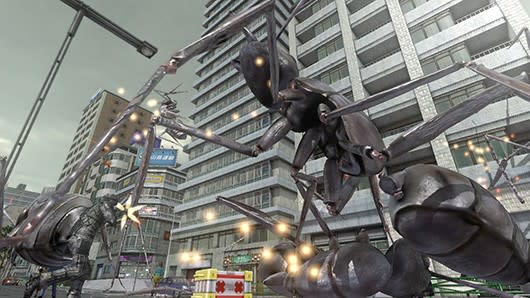 With all of the hubbub about next-gen at this year's E3, Earth Defense Force 2025 stood out as the product of an entirely different generation, one where wildly idiosyncratic Japanese-developed games both delighted and confused gamers willing to take a risk on untested and out-there concepts.

Technically, it's a complete mess, though I'm sure any fan of Earth Defense Force can tell you the series has never been known for its impeccable graphics or silky smooth action. Despite its rough edges in comparison to the polished Xbox One and PS4 games on display in the very same convention center, EDF 2025 still carries a unique charm.

Earth Defense Force takes the form of a sandbox action game, with each level offering destructible environments and swarms upon swarms of enemies, along with a simple goal of "kill everything." My brief time with the game put me at the controls of a Fencer, one of four unique robot classes available, and quite possibly the most accurate representation of what piloting ten thousand pounds of alien-stomping offense would actually feel like.

This hulking robot comes equipped with a standard plasma gun, a colossal hammer for melee attacks, and a rocket launcher made to take out enemy shields, though I couldn't use the latter on my own. Rather, the D3 rep – playing as another class, the Air Raider – first had to target the shield generator, which would give me the ability to lock onto it and fire. That said, the Fencer seems like a class for players who have a little more experience with EDF; due to its sheer size, the Fencer's attacks offer a significant amount of lag that's hard to compensate for with hundreds of giant ants and alien robots swarming around your head.

For my second (and last) mission, I jumped into the Wing Dancer class, which offered much more mobility along with the ability to zip through the skies for a short period of time. While my defenses dropped by a huge margin, using this lightweight class gave me a better taste of the game, since my actions amounted to more than just trudging around and firing off the odd missile. Just before my appointment ended, I had started to ease into EDF's mechanics, though 2025's technical deficiencies tend to subtract from any strategy you may have in mind. The combination of a jittery frame rate and a loopy camera in the show's build did its best to keep me completely disoriented through most of my session.

But Earth Defense Force doesn't feel like a game that should be approached thoughtfully – at best, it comes off as an arcade-style experience designed to be played with a buddy and some beers within reach. I'm not entirely sure if Earth Defense Force appeals specifically to me, yet it's somewhat refreshing to see consoles still have room for lightweight, b-grade fluff that doesn't intend to change the way you think about entertainment forever.
In this article: D3-Publisher, E3-2013, earth-defense-force-2025, microsoft, Namco-Bandai, playstation, ps3, xbox
All products recommended by Engadget are selected by our editorial team, independent of our parent company. Some of our stories include affiliate links. If you buy something through one of these links, we may earn an affiliate commission.