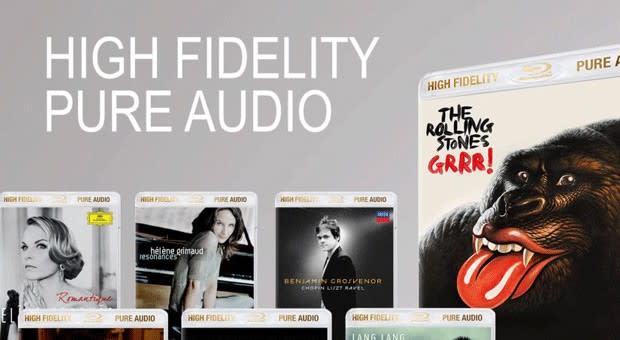 The announcement is wrapped in an aura of déjà vu: Universal Music Group is marketing an uncompressed, high-end digital audio format for Blu-ray called High Fidelity Pure Audio (HFPA). Where standard CD audio is 44.1KHz at 16 bits, HFPA's A2D sampling rate clocks in at a sky-high 96KHz at 24 bits.

Analog elitists will maintain that even extremely refined sampling is inherently inferior to capturing unchopped waveforms, and while that argument is fun to test, it is academic in the context of wide consumer adoption. Can a new audiophile format gain traction in a technomusical world governed by convenience and mobility?

I'm writing this column listening to the Synthwave / Dreamwave channel of AccuRadio through Yamaha YSTMS50W computer speakers. When I want to shut out worldly sounds I use $50 Logitech Ultimate Ears 350 buds. My Android phone and iOS tablet are stocked with music-streaming apps and downloaded playlists from subscription sites. In the car, I use a Griffin iTrip to push portable music through Bose speakers. I haven't owned a bookshelf CD player in at least 15 years. A rarely used DVD player is connected to my TV; no external speakers. I own a vintage pair of gorgeous JBL 4312 studio speakers that can no longer find a place in my dispersed audio rig.

In other words, my life is soundtracked with middle-of-the-road equipment adapted to consuming music through cloud-connected listening platforms.

People like me are why previous audiophile formats have crashed and burned -- or, more accurately, have flown silently into the void, unnoticed. Compact disc technology has never satisfied either audiophiles or nostalgic sentimentalists, who rhapsodize about the "warmer" sound of analog recording, and the bigger artwork of 12-inch records. The audiophile market is tempting, but always niche, and repeatedly unrewarding to format startups.

One of the first post-CD hi-fi efforts was Super Audio CD (SACD), which was launched in 1999 to fight two battles: sound quality, and insecure CD tracks that consumers were rampantly ripping, burning and loading into Napster. The second priority was arguably the more important to co-founder Sony, whose music division at the time was one of the "big five" major labels. Judged as a potential successor to CDs, and really by any other standard, SACD was a failure.

DVD-Audio launched a year after SACD, leveraging the digital roominess of DVDs. The greater canvas accommodated audio files encoded at higher sample and bit rates. The audio-quality gain was more pronounced than with SACD, but both initiatives cut against emerging trends in the same unproductive ways. The market was deeply swayed by an increasingly liquefied stream of musical bits represented by MP3, file sharing and new services that encouraged single-song downloading and streaming.

MP3 was -- and still is -- an audiophile savagery, ruthlessly throwing out parts of the original waveform in the name of file size. It's this fact that makes it a so-called lossy format, contrary to "lossless" digital schemes like FLAC and WAV.

Whether lossy or lossless, a recording's fidelity starts with how a track is captured -- the basis of "digital is bad" arguments. More broadly, the sound quality of music we listen to all day depends depressingly on the weakest link in the signal path. It's not just MP3, or crappy Apple earbuds, that degrade quality. The trend has a larger historical sweep. The entire recording industry is staged as a tug of war between quality and convenience.

A hundred years ago, it was a draw. Sound quality of vinyl records improved over metal cylinders as consumers enjoyed the massive convenience gain of reproducing music in the home. In the 1960s, radio delivered a roundhouse punch to audio quality with AM top-40 stations broadcasting pop hits to millions of teenagers carrying transistor radios -- possibly the worst playback solution in history. But convenient as hell. And a portent.

During the 15-year digital music era defined by MP3 and internet platforms, convenience has triumphed over faithful reproduction time and again. The trending values of progressive music consumption favor access above everything. Mobility is one touchstone: We want music delivered in nimble formats through hand-held and automotive devices. That key requirement demands miniaturization straight through the signal path, from encoding to playback hardware to earphones. Miniaturization is not the audiophile's friend.

Who is Universal Music Group thinking of as it attempts to make a market of HFPA? Audiophiles, of course, with high-end home theater setups; those who continue to buy physical music. (Side note: In Japan, CD sales grew in 2012, while digital download sales declined.)

Pinpoint marketing might be a slim reed of hope. Classical music is a fertile niche, if a receding one. Smartly, some of the first HFPA releases include classical piano superstar Lang Lang and the world's hottest orchestra conductor Gustavo Dudamel. The question there is whether traditional classical music consumers are sufficiently equipped in the home theater realm to explore Blu-ray products. And with the rise of movie-surfing on tablets (mobility rules again), what is the future of home theater? Is today's living room oasis the desktop computer of 2020?

Too many questions. By sensible reckoning, and in light of previous premium format failures, High Fidelity Pure Audio should be a non-starter. Put it into my phone, and sell me amazing $50 buds that don't weaken the chain (OK, I'll dish out $100), and I'll buy in. So would a lot of other people.

In this article: Blu-ray, Blu-ray Disc, bradhill, editorial, High Fidelity Pure Audio, Universal Music Group
All products recommended by Engadget are selected by our editorial team, independent of our parent company. Some of our stories include affiliate links. If you buy something through one of these links, we may earn an affiliate commission.