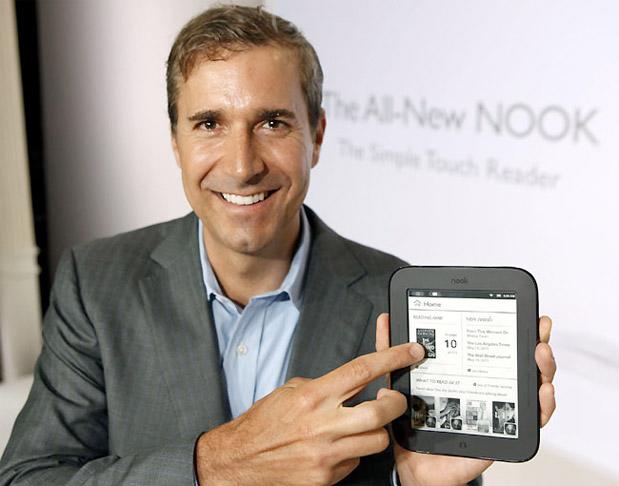 Following reports earlier this year that Barnes & Noble may be sliding away from producing its own Nook hardware, the outfit's CEO has just stepped away from his corner office. Announced in a series of shuffles, William Lynch has resigned as chief executive officer and director of the company effective immediately, while Michael P. Huseby has been appointed CEO of the Nook Media division (as well as president of B&N as a whole).

The firm also announced that vice president Allen Lindstrom was being subsequently promoted to CFO, reporting to Huseby. Moreover, Kanuj Malhotra -- VP of corporate development, has been promoted to CFO of Nook Media. Chairman Leonard Riggio thanked Lynch for his leadership during an era where B&N emerged as a real rival to Amazon in the reader / tablet market, while the man himself said that he "appreciated the opportunity to serve as CEO over the last three years." As for his immediate plans? Kicking back on the shores of Ocracoke and reading a book... on a Nook, of course.
Show full PR text

"We thank William Lynch for helping transform Barnes & Noble into a leading digital content provider and for leading in the development of our award-winning line of NOOK® products including NOOK Simple Touch™, NOOK Simple Touch Glowlight™, and NOOK® HD and NOOK® HD+ ," said Leonard Riggio, Chairman. "As the bookselling industry continues to undergo significant transformation, we believe that Michael, Mitchell and Max are the right executives to lead us into the future." Mr. Riggio added that the Company is in the process of reviewing its current strategic plan and will provide an update when appropriate.

"I appreciate the opportunity to serve as CEO of this terrific Company over the last three years," said William Lynch. "There is a great executive team and Board in place at Barnes & Noble, and I look forward to the many innovations the Company will be bringing to its millions of physical and digital media customers in the future."

Mr. Huseby joined Barnes & Noble as Chief Financial Officer in March 2012, and has led the Company's financial organization since that time. Prior to joining Barnes & Noble, he had a distinguished career in the media communications industry having most recently served as Executive Vice President and Chief Financial Officer of Cablevision Systems Corporation, a leading telecommunications and media company. Mr. Huseby also served in leadership positions at Charter Communications, Inc., the fourth largest cable operator in the U.S., as well as AT&T Broadband, a provider of cable television services.

Mr. Malhotra joined NOOK Media in May 2012 and in his role as Vice President of Corporate Development has been responsible for developing strategic priorities for growth and profitability. He was previously Senior Vice President and Chief Financial Officer at Affinion International.

In this article: barnes and noble, BarnesAndNoble, ceo, e book, e books, e reader, e readers, e-book, e-books, e-reader, e-readers, executive, nook, nook media, NookMedia, William Lynch, WilliamLynch
All products recommended by Engadget are selected by our editorial team, independent of our parent company. Some of our stories include affiliate links. If you buy something through one of these links, we may earn an affiliate commission.