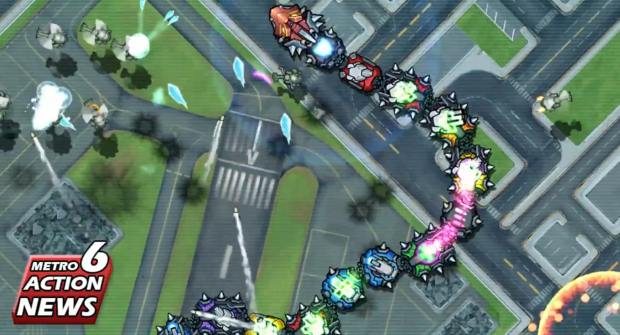 The makers of Jetpack Joyride and Fruit Ninja want you to destroy the planet. From the halls of the first annual PAX Australia comes Colossatron: Massive World Threat. Sure, the game's whole mass-destruction-via-aliens concept sounds a lot like Rampage, but as the announcement trailer shows, it's oh so much more. Players take control of a modular robotic snake, using all manner of upgradeable weapons and abilities to wreak wanton top-down chaos on an unsuspecting populace. The goal? Causing as much property damage as possible. Think of it as a modern take on Godzilla with a campy anime slant and you're mostly there. The Queensland, Australia developer's latest will be playable at its booth for the duration of the show. Can't make it to the expo? Skip past the break for the debut video.

July 19th, Brisbane, Australia – The most explosive game ever made from smash-hit mobile developer Halfbrick will be landing soon, with the world premiere trailer and first gameplay details being announced today.

Colossatron: Massive World Threat is the story of the biggest and most powerful being to ever wage war against mankind, with a unique style reminiscent of the craziest anime and cartoons of the 80s. And this time, the power is in the hands of the players in the ultimate role reversal, as they take control of Colossatron and wreak havoc across the globe!

From the unknown depths of space, the gargantuan robotic snake Colossatron crash-lands on Earth with no purpose other than causing ultimate chaos. With all the action being covered live by Rick Dalton and Katie Hazard of Metro 6 Action News, players must build and shape Colossatron to become an unstoppable force of destruction.

The military mobilizes under the command of General Moustache, and the battle begins! The key to victory is extending Colossatron by attaching red, yellow and blue Powernodes. Each color represents a different weapon or ability, and can also be combined to form new colors, stronger Powernode tiers, and more explosive secrets. Experimenting with how different build strategies hold up during the heat of battle is all part of the fun!

Success is measured by one key metric – dollars of damage caused. The more powerful Colossatron is, the more destroyed and the higher the score. Players can compare and even combine their destructive powers, with additional competitive and cooperative social features revealed soon.

Colossatron: Massive World Threat is fast, fun and non-stop action combined with signature Halfbrick design innovation and polish to make it something truly special. More details about the game will be surfacing in the coming weeks!

In this article: Chaos, colossatronmassiveworldthreat, destruction, FruitNinja, gaming, halfbrick, IosGaming, JetpackJoyride, PacificRim
All products recommended by Engadget are selected by our editorial team, independent of our parent company. Some of our stories include affiliate links. If you buy something through one of these links, we may earn an affiliate commission.