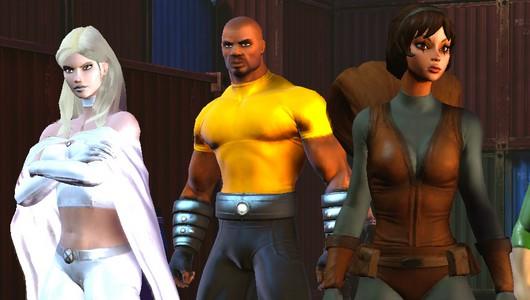 It's time again for Gazillion Entertainment's weekly Marvel Heroes dev blog, and this latest entry hops, skips, and jumps its way across a vast number of topics. First on deck are changes to the game's defense system and difficulty ratings; the dev team is working to reduce the odds of one-shotting and improve the experience for melee heroes.

Also in the works: tweaks to Midtown Manhattan, the release of rare costumes to the in-game store, a boost to the drop rate for eternity splinters, and further iterations to the game's upcoming optional PvP system. Of particular interest is the team's confirmation that it can change hero behaviors between PvE and PvP environments, meaning basic hero components like crowd control and cooldowns can be tweaked separately for both styles of play.

Finally, work continues on Emma Frost, Squirrel Girl, and Luke Cage, all due for release in the somewhat near future. Luke Cage can create (and throw) cars, Emma Frost brings new mind control abilities, and Squirrel Girl has... squirrels.

Most changes featured in the dev blog should be going live on test servers soon, if they're not there already.
In this article: action, action-mmo, dev-blog, dev-diary, Emma-Frost, f2p, free-to-play, freemium, gazillion, gazillion-entertainment, Luke-Cage, marvel, marvel-heroes, marvel-universe, marvel-universe-online, microtransaction, microtransactions, muo, patch, premium, secret-identity, squirrel-girl, superhero, superheroes, test-server, update
All products recommended by Engadget are selected by our editorial team, independent of our parent company. Some of our stories include affiliate links. If you buy something through one of these links, we may earn an affiliate commission.