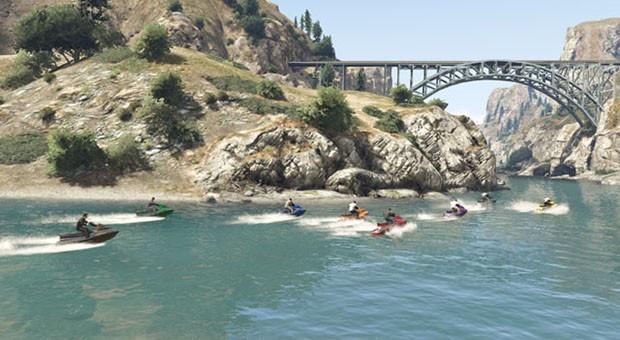 If you're already looking for a more worthy Grand Theft Auto 5 adversary than a computer can generate, here's the dirt: you can now play it online. Whether your battleground of choice is PlayStation Network or Xbox Live, only a "small title update" should be required to get online. Of course, that is assuming the game's servers can handle the load. With over 16.5 million copies already in circulation Day 1 connectivity could land somewhere near the Sim City end of the scale, and Rockstar's Social Club backend has already experienced some strain loading up pictures and stats from the single player edition. Assuming everything goes to plan however, players should be creating their avatars, forming online crime syndicates and visiting each other's houses.

The Content Creator tool that will let players design their own heists is one of the features scheduled to launch later this fall, for more details on what is available right away, check out this blog post. Access appears to be open on both PlayStation Network and Xbox Live, although we're already seeing reports of connection issues and "Rockstar cloud servers are not available right now" on both sides.

Update: Rockstar says it's aware of day one connection issues that its "trying to stabilize ASAP." Joystiq points out some have reported save file issues with their single player game after trying to hop online, so you may want to make a backup save, or just wait for the issues to subside before diving in. Check out the official list of known multiplayer issues here.

For those trying to get into GTA Online today, please bear w/ us on some day one tech connection issues that we're working to stabilize asap

In this article: GrandTheftAuto, grandtheftauto5, GrandTheftAutoOnline, gtaonline, hdpostcross, playstation3, psn, Rockstar, video, xbl, xbox360
All products recommended by Engadget are selected by our editorial team, independent of our parent company. Some of our stories include affiliate links. If you buy something through one of these links, we may earn an affiliate commission.