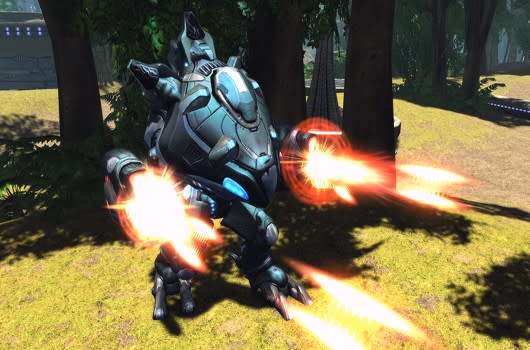 Finally! We finally have some news to report involving Star Trek Online's upcoming new content! Some of the new Season Eight material is up on the Tribble test server, and the new Featured Episode will be released on October 31st!

We still aren't exactly sure when Season Eight will be released, but it's now easier to see what's in store for us, including a new set of space missions and new ground missions that feature territory control. I've had a chance to jump onto Star Trek Online's Tribble server to try a few things out and to see these "dinosaurs with frikkin' lasers on their heads" for myself. So let's get to it.

There's still not a whole lot that we know about the new featured episode. We have finally been told that the new FE will be released at the end of the month after it was delayed by the dev team so they could add something "special" to it.

We are all anticipating one or more events to accompany the release of the episode as well, and although no one has confirmed what those events might entail. Whether it will be a Featured Episode re-run so lower-level characters can obtain the unique rewards from the previous episodes or a possibly even a double XP weekend -- that's all pure speculation at this point.

A recent interview by trek.fm with STO Lead Designer Al Rivera confirmed that there will likely be another Tribble test weekend at some point before the release of the Season Eight material on the Holodeck server. Of course he wouldn't say when that will be, nor would he supply a general target date. However, we're still assuming that the content will go live before the end of the year.

Some of the new material is already available to be tested on STO's Tribble test server. Currently the test server can be accessed only by Gold (subscription) members of the game. In the interview, Rivera stated that the reason for this is two-fold: to allow the Gold members a small added benefit and limit the number of people who will be able to access the new material to keep it as fresh as possible for those who will be waiting to see it until it goes live.

Rivera seemed very excited about the new content, so I read up on the patch notes and was happy to see a quite a few new things, including the new Dyson Sphere Battle Zone, the new Dyson Sphere Command Reputation System, the Fleet Spire holding, and a lot more. So I decided to patch up the Tribble server and see what I might be able to try out for myself.

While I didn't have a lot of time to test all of the new material before meeting the deadline for this column, I was able to jump in to experience the new Dyson Sphere ground adventure zone. It is completely unlike the ground adventure zone experienced at New Romulus. To begin with, the map is actually made up of three separate zones surrounding one central post where the Allied Command has been established. You read that right: Allied Command. The area will be accessible by all factions, and each faction has its own representative at the center in order to dispense mission orders.

While there are several objectives to be achieved in the battle zone, there really is only one main objective: to wrest control of at least 18 of the 21 areas away from the Voth and kill one of the three bosses. Then the whole thing starts over again.

All three zones are divided into seven smaller areas, each of which has a control hub. Every instance of the battle zone will be able to handle up to 20 players. Each captain can beam down with two bridge officers and team up with four other captains (meaning a team can consist of up to 15 officers). If I have done the math correctly, that means each instance can handle up to 60 officers at once (20 players plus their 40 bridge officers.)

Each control point must be overtaken and defended against multiple waves of Voth assault parties. The parties consist of enemies of varying strength, and I can tell you that it was impossible for my two bridge officers and I to attempt to control a single point on our own. This is definitely an area that will require team effort and in many cases a team strategy, for it's not enough to just kill the enemy; certain smaller goals must be achieved in order to guarantee success all while fighting off attackers.

Rewards as they are set up on the test server include reputation marks and other items. I don't want to get too bogged down in the potential rewards as they always seem to get tweaked before content goes live.

But what about those laser-helmeted dinosaurs?!

All right, all right! I'll talk about the "dinosaurs with the frikkin' lasers on their heads!" Now, I consider myself a die-hard Trekkie first and a gamer second, so this week when I saw the dev blog that featured the screencap with the velociraptor-like visage with laser helmets, I let out an audible "gigglesnort" and bit my tongue. Really? I thought. But I forced myself to ruminate on the Voth.

For those who don't know much about them, here's the skinny: They were a species that was featured in a single episode of Star Trek: Voyager. The crew of the ship (namely, Chakotay) makes contact with the species in the Delta Quadrant and discovers that the species bears DNA in common with all other life that developed on Earth. It's then discovered that the Voth were, in fact, descended from dinosaurs that had actually evolved into a technologically advanced society, achieved space flight, and left the planet, and that all evidence of their existence had been (miraculously) annihilated by asteroids, erosion, and time. The Voth scientist who discovered the DNA connection with the humanoids was censured as his heresy against their own origin myth was far too much for them to handle.

So while it took me some time to get over the laser-helmeted dinosaurs in the new content, I had to remember that Voth are dinosaurs and the velociraptor-like beings are just another part of their very strange tale. They seem to be integral members of the Voth community and have specialized roles in battle... and they get to wear awesome laser helmets. Now, why don't we talk about those Robocop machines...

Incoming communique from Starfleet Headquarters: Captain's Log is now transmitting direct from Terilynn Shull every Monday, providing news, rumors, and dev interviews about Star Trek Online. Beam communications to terilynn@massively.com.
In this article: captains-log, chakotay, cryptic, cryptic-studios, dyson-sphere, dyson-sphere-battle-zone, f2p, featured, featured episodes, free-to-play, opinion, perfect-world, perfect-world-entertainment, pwe, sci-fi, season-eight, star-trek, star-trek-mmo, star-trek-online, sto, territory-control, voth
All products recommended by Engadget are selected by our editorial team, independent of our parent company. Some of our stories include affiliate links. If you buy something through one of these links, we may earn an affiliate commission.