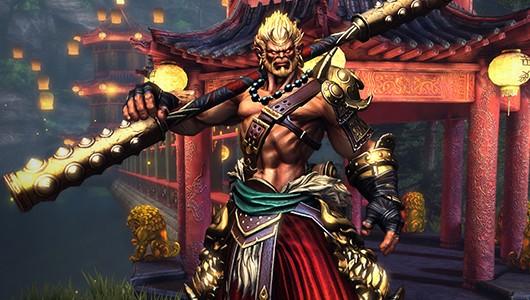 Another god has stepped into the SMITE arena, and it's one who will be familiar to longtime players of the game. Sun Wukong, the Monkey King, is making his return to SMITE with a new look and new abilities. Wukong is a physical melee character who has special protections against critical attacks depending on his health and uses his massive cudgel to dish out damage to enemy gods.

Sun Wukong also has the ability to transform into an eagle, ox, or tiger, with each form bringing a special combat effect. As an eagle, he moves quickly and passes through enemies. As an ox he injures and knocks back any enemy in his path. And as a tiger he pounces on and stuns the first enemy he encounters. Check out the full reveal video from Hi-Rez after the break.

In this article: f2p, free-to-play, hi-rez, hi-rez-studios, moba, multiplayer-online-battle-arena, new-york-comic-con, new-york-comic-con-2013, nycc, nycc-2013, shapeshifter, Smite, Sun-Wukong, trailer, trailers, video, videos
All products recommended by Engadget are selected by our editorial team, independent of our parent company. Some of our stories include affiliate links. If you buy something through one of these links, we may earn an affiliate commission.