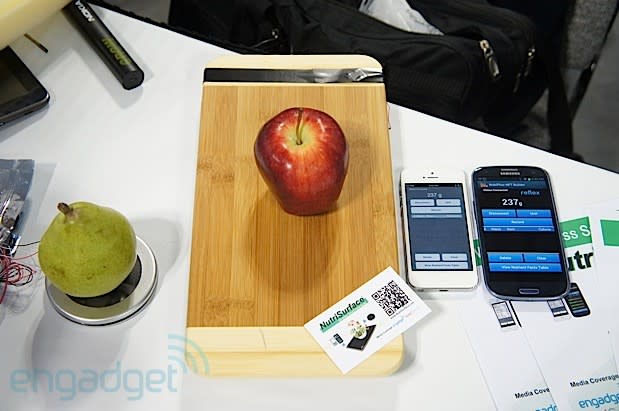 Obamacare is probably the last (loaded) term you'd expect to read about on a tech site -- no less in conjunction with a nutrition-focused gadget. But Andy Tsai, creator of the NutriSurface, actually credits the controversial healthcare program for redirecting his company ReFlex Wireless away from a focus on nanotech and towards a technological solution for the food and beverage industry. Pulling inspiration from a CNN segment documenting the new challenges and nutrition label requirements for major food chains, Tsai devised an intelligent scale/chopping board that would be able to streamline the information-gathering process for restaurants and grocery chains.

The resulting NutriSurface, now its third iteration, has broken away from its modest incarnation as a one-way communication device into two separate models: a coaster and waterproof chopping block that not only transmit nutritional info, but can also be programmed remotely. Neither device is yet on the market and both are still undergoing testing, but Tsai plans to launch an Indiegogo campaign for the product and, if its current market success is any indication, crowdsourcing could help to expand its uses even further. As Tsai put it, the NutriSurface was "built to be a hardware platform where developers can [create] their own applications," thus leaving the modest device open to myriad uses.

Though it was initially conceived as a tool for restaurants and chains, Tsai says that actual use cases have evolved over time thanks to simply having the product out in the wild. Since its release last September, bodybuilders have glommed onto the NutriSurface as a means of accurately calculating the proportions of supplements and parents of children with Type 1 Diabetes have even purchased the scale to help monitor and prepare healthy meals. There's also, as you might assume, heavy interest in recipe collection and cooking, in general. Tsai and his partner currently maintain an open database that offers a range of information on about 800 food items available across six apps (four for Android and two for iOS), but his small team can't anticipate every developing need. And because of that, Tsai's leaving the database and APIs open to developers to pull data and create their own custom apps tailored to specific use cases.

The NutriSurface coaster was actually one such crowdsourced development that sprung from the requests of two separate users seeking a smaller-sized scale for beverage or food plate measurements. Initially, this coaster was designed to be six inches in diameter, but the company shrunk it down to three inches to make it much less obtrusive. Tsai plans to make both this and the full-fledged chopping board IPX7 certified (read: waterproof along the lines of Sony's Xperia Tablet Z), but the coaster does boast one advantage the larger scale doesn't: customizable RGB LEDs. So, for example, if you want the coaster to tell you when you should drink your next glass of water, it could be set to glow green, all the while measuring your intake.

Despite its niche appeal, there's a broader market future for the NutriSurface -- one that could see it at a grocery store near you. At the moment, Tsai's company is in talks with a major North American grocery chain to offer a white-labeled version the NutriSurface in-store throughout Toronto locations. If and when that scale is released, it will be accompanied by branded apps that incorporate information on all of the food items carried by the unnamed partner chain.

Don't be fooled by the prototype image above; the final retail version of the third-generation NutriSurface will look much sleeker and won't be made of wood. Tsai, in keeping with his desire to waterproof the device, has chosen to build the new model out of uneven tempered glass so as to pass FDA testing and also allow users to chop food items without knife slippage. Further, USB and removable battery-powered charging will be removed from the final model in favor of inductive charging. Battery sizes for both NutriSurface scales haven't been settled, but the chopping board should ship with a 700mAh cell rated for one month of continuous use and a 300mAh cell for the smaller LED-ringed coaster.

The NutriSurface is scheduled to hit retail next March priced at $150 for the chopping board and $100 for the coaster, though Indiegogo supporters that buy in early will enjoy discounted prices: $75 and $50, respectively. So no matter your stance on Obamacare (or its effect on the food industry), you can't deny the NutriSurface is proof positive that inspiration comes from the unlikeliest of places.

In this article: expand, expand new york, ExpandNewYork, expandnyc2013, food, hands-on, insert coin, Insert Coin New Challengers, InsertCoin, InsertCoinNewChallengers, nutrisurface, nutrition, obamacare, reflexwireless
All products recommended by Engadget are selected by our editorial team, independent of our parent company. Some of our stories include affiliate links. If you buy something through one of these links, we may earn an affiliate commission.