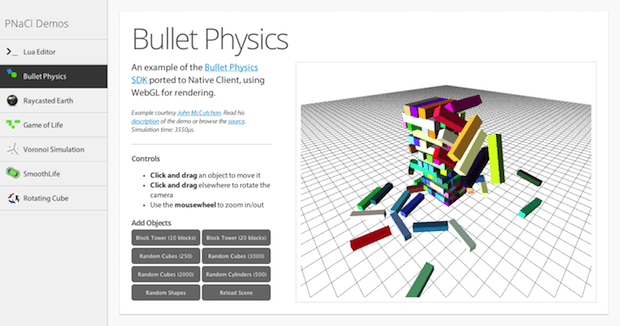 Since 2011, Google's Native Client has been enabling developers to write applications like photo editors, CAD modelers and 3D games in C or C++ and run them inside the Chrome browser. Initially, Native Client only functioned on x86 machines, and early this year it began working on ARM devices, too. However, coders had to recompile their apps for each kind of CPU architecture. Now, the company's long-awaited Portable Native Client has arrived, and with it comes the elimination of the need for platform-specific recompiling. That means devs can compile their app a single time and have it run seamlessly on devices with x86, ARM and MIPS chips. For now, PNC is only supported in Chrome, but should devs want their apps to run in Firefox, Internet Explorer, Safari or any other browser, they can use Google's Pepper API and JavaScript to get the job done. Of course, there's lots more info about Portable Native Client and how to get started using it over at the Chromium blog, so hit the source for the full spill.

In this article: airbnb
All products recommended by Engadget are selected by our editorial team, independent of our parent company. Some of our stories include affiliate links. If you buy something through one of these links, we may earn an affiliate commission.