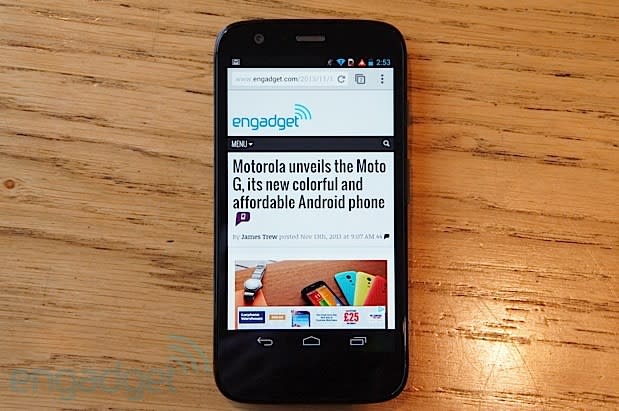 The Moto G may not reach the US until January, but that doesn't mean it will be unavailable on North American shores until then. Motorola's budget wunderkind has just reached the continent through Canada's Telus and its low-cost Koodo brand. Both carriers are selling the 8GB smartphone for $200 CAD ($189 US) off-contract; thriftier shoppers can get the Moto G for free on a two-year Telus agreement, or $50 at Koodo with a $150 use tab. Other local carriers aren't expected to offer the Moto G in the near future, so this may represent the best chance of getting the handset for both Canucks and eager American importers.

In this article: android, canada, google, koodo, minipost, mobilepostcross, mobilepostmini, motog, motorola, smartphone, telus
All products recommended by Engadget are selected by our editorial team, independent of our parent company. Some of our stories include affiliate links. If you buy something through one of these links, we may earn an affiliate commission.