Sam Cervantes didn't stand on his new printer when he brought it by our offices the other day. He thought about it for second, a nice reprise of the day he introduced us to its predecessor late last year, but, well, he'd only just pulled that first unit out of the box for the first time, and he didn't want to scuff up its finish or dent the new enclosure. As to whether the new 3D printer could sustain the weight of a full grown man, he certainly thinks so. It's still got that steel structure, after all. Maybe we can convince him to put on a show at CES in January.

Structural integrity questions aside, the latest printer from Solidoodle is a nice looking thing, certainly. As the Brooklyn-based company began looking to expand its sales footprint beyond enthusiast-based direct marketing, it no doubt realized that it would have to produce a product that could live on store shelves comfortably next to, say, a laptop or an HP printer. It sounds silly, sure, but big box stores aren't particularly interested in stocking products that look as though they might have been built in someone's garage. For all its charms, the Solidoodle 3 had a certain home-brewed quality to it. The new printer goes firmly in the other direction, with a metal enclosure that wouldn't look too out of place in a lot of homes. 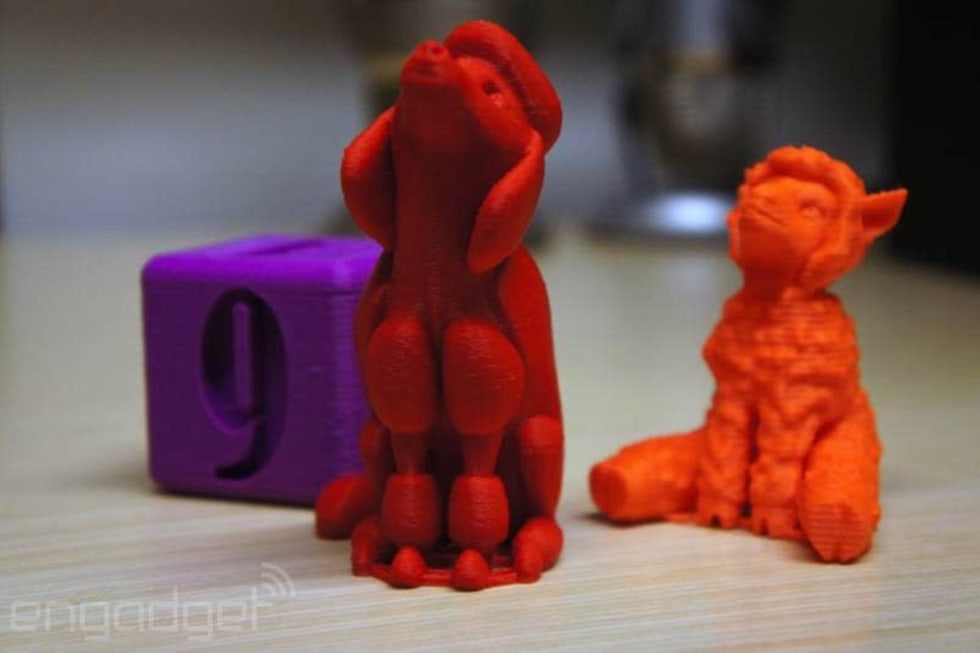 In fact, the printer looks a bit like an appliance - a mini-fridge or a maybe a tall microwave when you fire up the LED lighting inside. And hey, I could certainly see it sitting next to my desk in my new apartment. The price is right, too. Granted, it's currently the most expensive entry in the Solidoodle lineup, but it's competing with $800 and $500 price points (both of which sticking around, for the record). At $999, the Solidoodle 4 is still easily one of the most affordable pre-built consumer facing 3D printers out there - it's certainly one of the most affordable that you can buy at retail. The company's also announcing today that the printer will be available for purchase at Micro Center retail locations.

The enclosure features two access point, a front door that shuts magnetically and a panel at top, both of which offer pretty good views of the heated print bed. The shell also means that the electronics are more protected on past units. The build area is 8 x 8 x 8 inches, compared to the Replicator 2's 11 x 6 x 6. There are some thoughtful tweaks throughout, as well, like the spool placement, which is now perpendicular to the printer, to prevent tangles and the vertical access adjustments, which no longer require a screwdriver. Cervantes managed to get the printer running without any adjustments to the platform, straight out of the box, which is impressive - though he did have to fiddle with the one of the fans, which had been knocked about in transit and was making a fair amount of noise. So, plug-and-play, check. We won't say it's perfectly user-friend yet, though. While Solidoodle has done some work on the software front, we suspect there will still be a bit of a learning curve on that front for users who haven't spent much time with a 3D printer. Still, if you've got the money to spend and are looking for a way into the world of 3D printing, the Solidoodle 4 looks like it may be a solid choice. The printer is available for order today through the company's site. They'll be hitting Micro Center locations "in time for Christmas."

In this article: 3d printer, 3d printing, hands-on, solidoodle, solidoodle 4, video
All products recommended by Engadget are selected by our editorial team, independent of our parent company. Some of our stories include affiliate links. If you buy something through one of these links, we may earn an affiliate commission.