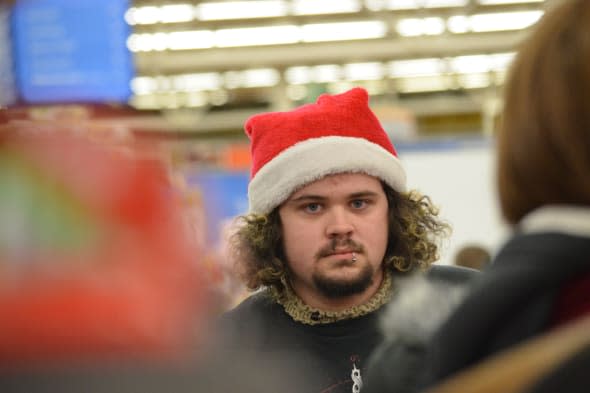 There's good news for Apple Store employees and terrible news for people who like shopping on Thanksgiving. Only one Apple Store will be open for business during this year's great annual family gathering of Thanksgiving/turkey massacre.

According to IFOAppleStore, only the Royal Hawaiian store in Honolulu will open on Thanksgiving day this year. Presumably this is some sort of karmic debt being paid for getting to live in Hawaii year-round. The store's hours will be 10 AM to 10 PM.

But don't you worry Apple-minded shoppers; the Apple Stores will be ready for you on Black Friday, with most US stores opening at 6 AM to accommodate your iPad-acquiring needs. When your shop will close on Black Friday depends on a number of factors, including the store's leasing agreement, local permits and other regional oddities.

Las Vegas' Forum Shops Apple Store will be the last to close on Black Friday at 11:59 PM while the Greenwich Avenue store in Connecticut will close its doors at 7 PM. Check with your local Apple Store to make sure you know exactly when it will be closing.

There is one bright spot for those Apple Store employees working in the Honolulu store this Thanksgiving however. Their store won't open on Black Friday until 8 AM, giving them an extra few hours of sleep on their other Apple Store brothers and sisters.

If you've been wondering why exactly so many stores have fought to be open on Thanksgiving this year, rather than, say, let their employees spend time with their families on one of our few remaining important national holidays, consider this. In 2013, there is one less week between Christmas and Thanksgiving than normal, meaning one less week of sales for those stores. Considering many businesses make one-third of their total yearly profits during the holiday buying season, their desire to stay open is understandable.

But if you're, for some reason, actually setting foot in a store on Thanksgiving day, please, for the love of God, be kind to the people who are forced to work that day. They're sacrificing a day with their families so you can get what might be just an illusion of a good deal.

In this article: blackfriday, family, sales, thanksgiving
All products recommended by Engadget are selected by our editorial team, independent of our parent company. Some of our stories include affiliate links. If you buy something through one of these links, we may earn an affiliate commission.