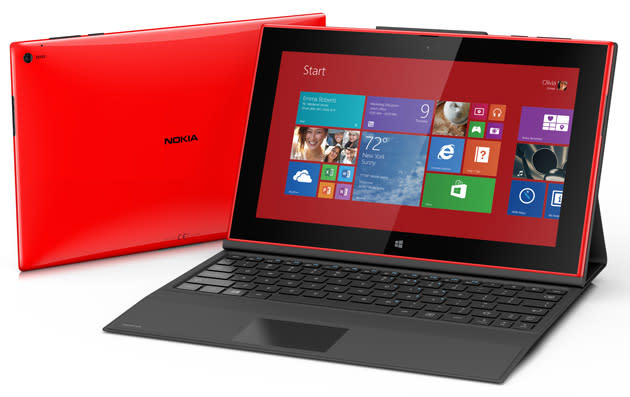 UK-centric news is plentiful today while America busies itself with feasts and football. One such announcement concerns the launch of Nokia's first tablet, the Lumia 2520, which will go on sale December 4th exclusively at John Lewis and affiliate stores. Running Windows RT 8.1, the colorful 10.1-inch tablet will cost £400, while the optional keyboard accessory will retail for an additional £150 when it becomes available "in the coming weeks" (although we can't say we were enamored with the typing experience in our review). Curiously, John Lewis' monopoly means you'll have to go to extra lengths to make use of the 2520's LTE radio by procuring a 4G data-only SIM from EE or O2. Thus, you also can't take advantage of any carrier subsidies. There's no word on exactly when the exclusivity period will end, but if you just have to have one, you know exactly where to go.

Update: We've now learned exclusivity finishes at the end of February next year, and that every Lumia 2520 bought from John Lewis includes an EE 4G SIM with 200MB of free data.

In this article: ee, johnlewis, lumia2520, microsoft, nokia, nokialumia2520, tablet, tablets, uk, windowsrt, WindowsRt8.1
All products recommended by Engadget are selected by our editorial team, independent of our parent company. Some of our stories include affiliate links. If you buy something through one of these links, we may earn an affiliate commission.