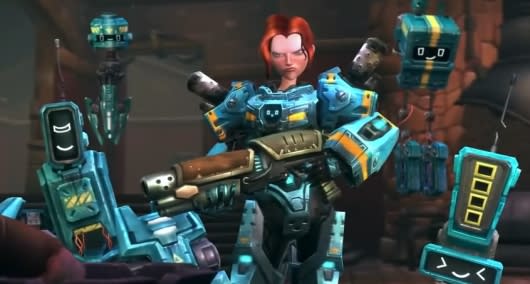 It must have been serendipity that got me into the WildStar beta the week after the Engineer was announced (well, that or a PR push, but what are the odds?). As my friends, my family, and those who come within shouting distance of my voice know, I am always drawn to Engineers in video games. Whether the game be Team Fortress 2, Guild Wars 2, or Warhammer Online, if I have a big wrench, turrets, guns, pets, and/or lots of gadgets, I'm a pretty satisfied human being.

WildStar's Engineer almost sounded too good to be true to me: a heavy armor-wearing ranged class that could DPS or tank while fielding combat robots. There might have been mention of a mech suit as well, but by that point I was twitching on the floor after suffering a happiness seizure. But would this perfect match on paper meet up to the cold, colorful reality when I got into the game? There was only one way to find out. Honey, take the kids out for the next two days, for I have space clobbering to do! I leveled a Mechari Engineer named Beebox to 10 over a couple of days to get some good hands-on time with the class. The choice of a female Mechari almost set me off of the game, as the bizarre body proportions and flouncy run felt, well, a little insulting to both genders. "Tee hee, I'm a girlie robot, look at my literal cans and the girlie way I run!" Stylized I can get behind, but perhaps the art and animation departments went a little too far with the Mechari.

Flouncing aside, the Engineer is pretty cool from the get-go. You come out of a cryopod with heavy armor and are soon handed a giant pulse rifle. This is my rifle and this is my gun; this is for fighting and this is for statistical improvements that help my gearscore for the inevitable raid gating. You also start with the ability to throw on your mech suit (which gives you a damage buff for a short duration) and a pulse blast. The latter is a pretty cool attack. It has a short charge before unleashing a powerful attack. During the charge, the telegraph system allows you to position your attack for maximum effect, as the center of your three lanes of attack hits the hardest.

Speaking of telegraphs, I hadn't been giving them much thought prior to really giving WildStar a go, mostly because I assumed they were like a lot of other "action" MMOs -- you know, don't stand in the red circle of death. But I found a new twist here, with telegraphs that take all sorts of shapes and the need to jockey for positional advantage between your telegraphs and those of the enemy. It was delightfully intuitive, and the only fault I had with it is that some of the ground cover made it hard to properly see the red and blue telegraphs.

For a Dominion character, the first couple of levels of my existence were spent on the giant spaceship Destiny. As a tutorial, it was a shade too long but very thorough and not at all boring. By the end of it, I had a good handle on fighting as well as an appreciation for the backstory of the Dominion and Nexus.

Over the next 9 levels, I expanded my library of skills. WildStar starts out by automatically granting you skills and placing them in your hotbar for the first few levels, but after that you not only have to purchase them but have to decide which skills you want equipped. Face the facts: You're not going to have enough hotbar spaces for them all.

At level 2, the Engineer gets a very useful finisher called Electrocute. It's a three-second channel of electricity that draws on the charge that your other attacks cause. So I quickly got into a pattern of doing two Pulse Blasts followed by a nasty Electrocute, which would more often than not turn all of the bad guys into gibblets.

So what about pets? You unlock your first robot at level 4, a bruiser bot that has a handy taunt to keep aggro off of you. I went for several levels thinking that this bot was the most ineffective pet ever because it never taunted until I finally realized that unlike many other MMOs, WildStar expected me to manually trigger the taunt myself (the summon bot skill turns into the taunt skill when your pet is in the field). I was much more excited to get my smaller but deadlier artillery bot at level 6. This little critter has a good long-distance attack, but you can also trigger a barrage attack to smite enemies in a small area. And yes, you can have both pets out at the same time if you want to use those hotbar slots for them.

Past the bots, level 3 gives you Zap, a lightning-quick, short-duration stun. I was pretty partial to it in just about every fight, since that second or so reprieve gave me time to charge up another pulse attack or order my bots into the fray. Other skills include Quick Burst (an attack that opens up when you crit), Urgent Withdrawal (you snare the enemy and jump some ways back), Hyper Wave (a taunt), Flak Cannon (a channeled low-damage cone attack), and Recursive Matrix (a deflection shield for you and your physically closest friends).

By level 10, I had several options of builds. I preferred to field both of my bots along with my Pulse Blast, Electrocution, and Zap. Even with heavy armor and ranged damage, I couldn't content myself with standing still. Engineers need to be mobile to avoid the worst of group attacks, and maneuvering fields of fire so that multiple enemies will be hit is a must.

So what did I think of my initial experience with the class? It wasn't much of a surprise: I loved it. I felt like a hardy space marine with a squad of robot troops stomping all over the landscape. The skills felt very quick and responsive, and my initial irritation at pulse blast requiring that second or so to charge up before erupting eventually gave way to an enjoyment of the pace of battles. I definitely can see the Engineer as being a welcome group member, not just for taunts and damage but for team-supporting abilities. I spy with my little eye

Even though I was playing over the weekend to examine the Engineer, I had several other quick observations that I wanted to share. Overall, WildStar meets my reasonable expectations for what Carbine's been projecting. It's pretty slick, very colorful, full of personality, and simply fun. There's a lot of the old mixed with clever new approaches, and the whole kit-n-kaboodle seems to work. No major red flags popped up for me aside from a nasty stretch of lag when a stress test group came in to play.

Little things that pleased me included the absolutely terrific music, the fact that housing and costume items dropped off mobs, going through a museum and seeing a diorama, laughing at the plentiful humor, getting into the little challenges (time-limited localized quests), watching those on the builder path construct cool little depots for us all to use, and seeing just how much attention was paid to lore delivery.

I kept a list of a few downsides for fairness' sake. I know every new MMO gets compared to World of Warcraft, but the sheer similarity with WildStar's stylized art is going to cause people to make this comparison more than normal. Quest guidance wasn't always as clear as it should be; I often found myself squinting at the cluttered map figuring out where to go for what.

WildStar is also, well, pretty in-your-face with its attitude. It's kind of like a late-'90s commercial with snowboarders drinking Mountain Dew; it growls at you things like "DOUBLE KILL!" and has Batman-like exclamations pop up on the screen, and it has the least subtle level-up animation of all time. Your mileage with this attitude may vary, but it could be a little too much for some folks and tip the scales from "funny/charming" to "ugh annoying."

Undoubtedly, on launch day I'll be rolling up an Engineer as my main. If you like pets, tanking, or simply blasting bad guys to kingdom come with big guns, you'll probably be doing the same.

Don't miss the rest of today's WildStar coverage!
In this article: beta, bot, bots, carbine, carbine-studios, class, engineer, featured, first-impressions, guild-wars-2, hands-on, ncsoft, pet, pets, preview, previews, robot, robots, sandpark, sci-fantasy, sci-fi, team-fortress-2, warhammer-online, wildstar, world-of-warcraft, ws
All products recommended by Engadget are selected by our editorial team, independent of our parent company. Some of our stories include affiliate links. If you buy something through one of these links, we may earn an affiliate commission.