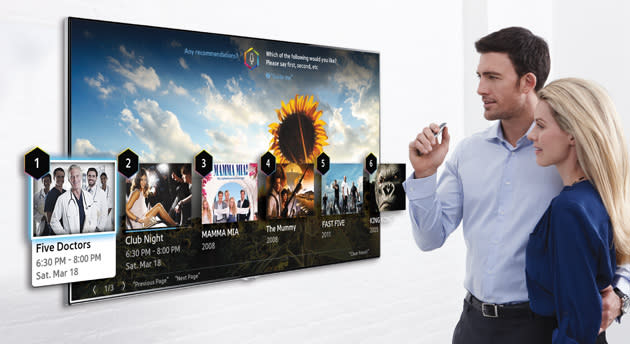 Samsung's 2014 smart TV lineup may revolve around impressive-looking hardware, but the Korean tech giant has revealed that interface improvements will also play an important role. Its new TVs will support finger gestures that should be more intuitive than the whole-hand commands of this year's models; you can stop a movie with a spinning motion, for instance. Voice control will also be more powerful. It's at last possible to change channels or launch apps with a single step, and search results appear in one place. While the gesture and voice upgrades may not be revolutions, they'll likely be welcome to viewers frustrated with unwieldy TV software.

In this article: ces2014, finger, gesture, hdpostcross, samsung, smarttv, television, tv, VoiceRecognition
All products recommended by Engadget are selected by our editorial team, independent of our parent company. Some of our stories include affiliate links. If you buy something through one of these links, we may earn an affiliate commission.