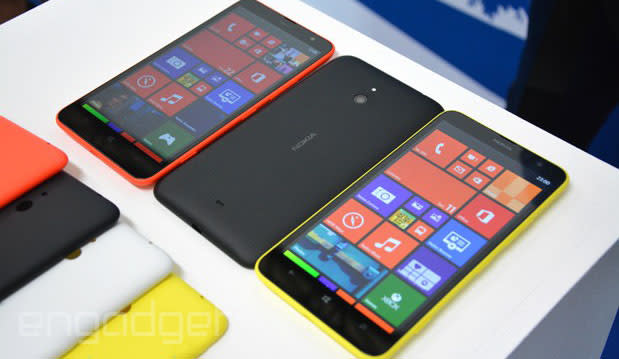 Large-phone lovers on a budget, rejoice: Nokia's 6-inch, $339 Lumia 1320 smartphone is now available in China. That's a bit earlier than the January 2014 time-frame it first promised, and the Finnish company said it'll also roll out in Taiwan, Hong Kong, Singapore and other countries (likely in Europe) in the coming weeks. It packs a whopping 3,400mAh battery for the long-winded, but otherwise has middling specs: a 720p screen, dual-core 1.7GHz Snapdragon 400 CPU, 1GB of RAM, 8GB of expandable storage and a 5-megapixel camera. Unfortunately, there's no word of an arrival date for those in the US torn between a tablet and phone -- but given the LTE bands we saw at the FCC, don't hold your breath.

In this article: Asia, China, Lumia, Lumia1320, nokia, Release
All products recommended by Engadget are selected by our editorial team, independent of our parent company. Some of our stories include affiliate links. If you buy something through one of these links, we may earn an affiliate commission.