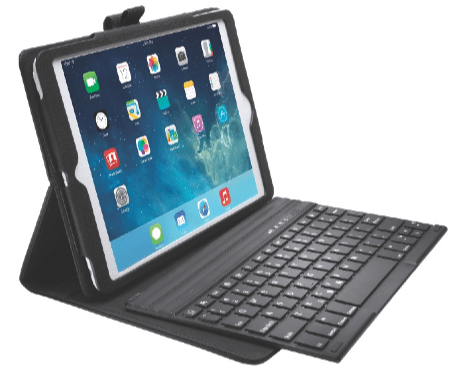 Another keyboard folio has just appeared for the iPad Air, this time from longtime accessory manufacturer Kensington. The KeyFolio Pro keyboard folio for iPad Air (US$99.99) is perfect for the person who wants both protection and a keyboard for the iPad Air, as well as a budget price. We'll take a quick look in this review, and then a reader has the opportunity to win a KeyFolio Pro for iPad Air from TUAW and Kensington.

Well, enough of my griping about Kensington's propensity to flood the market -- let's look at the KeyFolio Pro. It's a rather nondescript black faux leather folio with a removable Bluetooth keyboard that's held into place with some strong magnets. The 1 lb., 4.5 oz. (581 grams) KeyFolio Pro is much heavier than Belkin's Ultimate Keyboard for iPad Air, which weights in at 14.6 oz. (413 grams) and even more weighty than Belkin's Slim Style Keyboard for iPad Air which resembles the KeyFolio Pro but is 3.5 oz. (99 grams) lighter.

There's a magnetic closure that is supposed to keep the folio closed; in reality, the magnet is quite weak and flopped open easily. There are also a series of magnets that work with the iPad Air side of the folio to let it adjust to a number of varying angles, particularly when the keyboard is removed.

The iPad Air is held in place by a slim bezel of the same faux leather, with cutouts for buttons, speakers, and ports.

There are two things that recommend the Kensington KeyFolio Pro for iPad Air -- the keyboard itself and the adjustability of the display angle.

The keyboard is, unlike the Belkin keyboards, a completely standard keyboard layout. That means that you can type quickly without fear of hitting the wrong keys, which was a constant battle with the Belkin layout. There's a top row of iPad "function" keys above the number keys, quite useful for controlling music playback, Siri, or bringing up the virtual keyboard on the screen.

For charging, the KeyFolio Pro uses an included USB to micro-USB cable. For initial pairing of the device, Kensington uses the "old" method of pressing a pairing button, then having you type in a code displayed on the iPad Air screen onto the keyboard. This seems to indicate that the KeyFolio Pro is using an older version of Bluetooth and not the Bluetooth 4 LE standard used on many new keyboards. With those keyboards, pairing is much easier to accomplish.

The feel of the keyboard is quite nice, and it's possible to really speed type on this thing without fingers going to misplaced keys. I also liked the ability to remove the keyboard from the folio and place it elsewhere on a table with the iPad Air further away. There is apparently a backlit version of this keyboard folio (yet another SKU?), so if you need to type in the dark you may wish to search for that version.

As an incentive, Kensington is also offering 65 GB of Google Drive storage for one year when you purchase the KeyFolio Pro for iPad Air.

Kensington's KeyFolio Pro for iPad Air is the first of the confusingly large array of keyboard folios that the company has shipped. It's a rather plain-Jane keyboard folio, although the keyboard has a great feel and a standard layout that make typing a breeze.

Have an iPad Air? Need a keyboard folio for it? We've got one for you, thanks to Kensington.

In this article: accessories, features, giveaway, iPad, iPad Air, IpadAir, Kensington, Kensington KeyFolio Pro for iPad Air, KensingtonKeyfolioProForIpadAir, review, video
All products recommended by Engadget are selected by our editorial team, independent of our parent company. Some of our stories include affiliate links. If you buy something through one of these links, we may earn an affiliate commission.