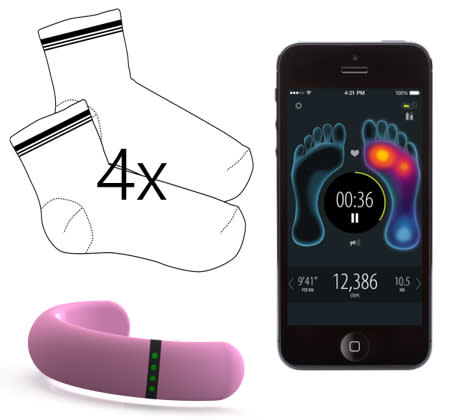 Happy 2014! If you had any doubt that the future was here, just check out these socks. It's hard to imagine we've lived through a time in which undergarments with sensors weren't the norm, isn't it? Fear not, because Sensoria's fitness tracking sport socks are set to start shipping March 15th. The wearables feature textile sensors that work with a Bluetooth anklet, tracking your steps, speed, weight distribution, foot landing and cadence. Naturally, they'll run you a tad more than the pair of Gold Toes you just picked up at Target, at $200 for a pair of four, along with the aforementioned anklet. Sensoria's also got textile electrode-laced sports bras and t-shirts coming in January and February, respectively, though you've actually got to pick up a third-party heart monitor from a company like Garmin to make the most of those. So, are fitness socks really that big an improvement over, say, a bracelet? We'll let you know after we see some of these wearbles in action at CES.

In this article: ces2014, fitness tracker, sensoria, socks
All products recommended by Engadget are selected by our editorial team, independent of our parent company. Some of our stories include affiliate links. If you buy something through one of these links, we may earn an affiliate commission.