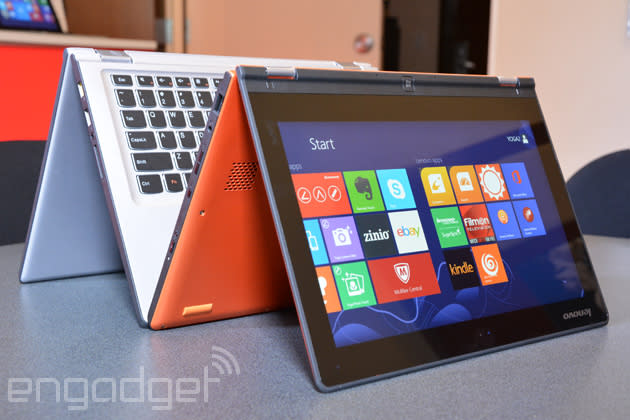 When Lenovo announced the Yoga 2 Pro, we all assumed it was the souped-up successor to the first Yoga 13. Apparently that wasn't the case. Lenovo just refreshed the original Yoga 11 and Yoga 13, both of which are now called the Yoga 2. Of note, the Yoga 2 13 has mid-range specs, and will actually be sold alongside the flagship Yoga 2 Pro. For instance, the processor goes up to Core i5, not i7, and the screen resolution maxes out at 1,920 x 1,080 instead of 3,200 x 1,800. Also, it doesn't appear SSDs are offered here; you can get up to either a 500GB HDD or hybrid hard drive. On the flip side, it steps up to a backlit keyboard and eight-hour battery. We did, however, notice the machine is slightly thicker and heavier this time (3.5 pounds and 0.68 inch thick, versus 3.3 pounds/0.67.inch last year). We bet it's because there's now a spinning hard drive instead of a solid-state one.

As for the 11-inch model, it now runs full Windows instead of Windows RT, but that shouldn't be a surprise: Lenovo has long since discontinued the original Yoga 11. This time, it's powered by a quad-core Bay Trail Pentium processor (just like we thought the original should have been), with up to 500GB of storage and a rated six hours of battery life. As before, too, it has a 1,366 x 768 IPS display. What's nice is that despite the heavier-duty components, the machine still weighs about the same as it did when it had a low-power ARM processor: just 2.9 pounds, up from 2.8 in the last model. Look for the 11-inch model to appear first -- it should ship later this month for $529. If it's the beefier 13-inch version you're after, you'll need to wait until early February, at which point it will retail for $999 and up (knowing Lenovo, though, you'll probably enjoy some steep discounts if you buy it online). In this article: ces, ces2014, hands-on, laptops, lenovo, lenovoyoga2, yoga2, yoga211, yoga213
All products recommended by Engadget are selected by our editorial team, independent of our parent company. Some of our stories include affiliate links. If you buy something through one of these links, we may earn an affiliate commission.