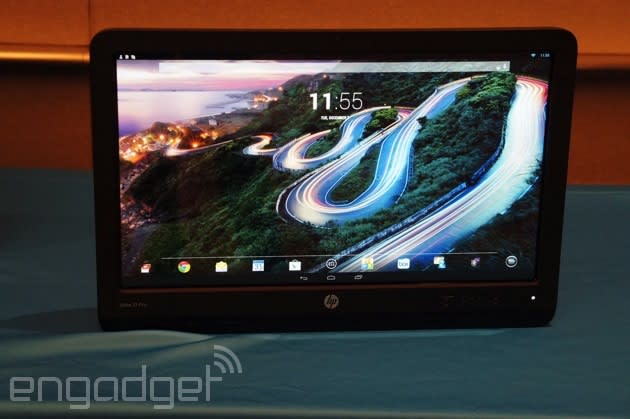 Never mind that it's CES, short for Consumer Electronics Show. Pretty much everything HP is showing off this week in Vegas is aimed at enterprise users -- or rather, the IT guys tasked with outfitting employees. Out of everything HP announced today, the most interesting thing might be the Slate 21 Pro, an Android-powered all-in-one tailored for business users. Granted, this isn't even HP's first Android AiO (that would be the original Slate 21), but it is the first time HP's tried it for the corporate set. And hey, if HP isn't going to announce any consumer products, the next best thing are products that are at least consumerfied, right?

At any rate, the big story here is the software: In addition to all the usual Google services (e.g., Gmail and Drive), HP is pre-loading the thing with Kingsoft Office, Evernote, Skype, HP Classroom Manager, 50GB of lifetime Box storage and Citrix Receiver for remote Windows access. To be sure, one could use all these apps in the office, if only on a secondary display, but HP also imagines this guy being used in classrooms, computer labs, public kiosks and maybe hospitality settings (think: business centers at hotels). And given that it runs Android 4.3, the owner can use the restricted-profile feature to make it so that guests can only use certain apps (the web browser, for example). It's available now on March 6th for $399, keyboard and mouse included -- not that you're likely to buy one of these yourself.

Additionally, HP announced the Pro x2 410, an 11-inch detachable laptop, and its first hybrid for the business market. All told, it seems like the business version of the Split x2, in that it runs a Core i3 or i5 processor and rocks a modest 1,366 x 768 display with no pen input. That will ship this month "at or around $899," according to a company rep. Also, in addition to the Slate 21 Pro Android all-in-one we just told you about, HP unveiled two other AiOs -- the ProOne 400 and the HP 205, both of which run Windows. Starting with the 400, it's actually available in two screen sizes: 21.5 inches if you want touch, and 19.5 without. Either way, you get a choice of Haswell processors, though screen resolution varies depending on the model; the touch version goes up to 1080p, while the non-touch is capped at 1,600 x 900. Those are available today, starting at $799 with touch and $649 without. Meanwhile, the HP 205 is an 18.5-inch machine with low-end specs (1,366 x 768 display, dual-core AMD Kabini APU) and a budget price to match ($449 and up). Finally, HP outed a new laptop series, the 300 line, which includes 14- and 15-inch models with spill-resistant keyboards, anti-glare panels and fingerprint readers, but not the premium software add-ons you'd get on the existing 400 series. That will go for $399 and up. And there you have it! Enjoy the press shots, if by chance you're itching for a closer look.

In this article: ces, ces2014, hp, hp205, Hp210, proone400, prox2410, slate21pro
All products recommended by Engadget are selected by our editorial team, independent of our parent company. Some of our stories include affiliate links. If you buy something through one of these links, we may earn an affiliate commission.