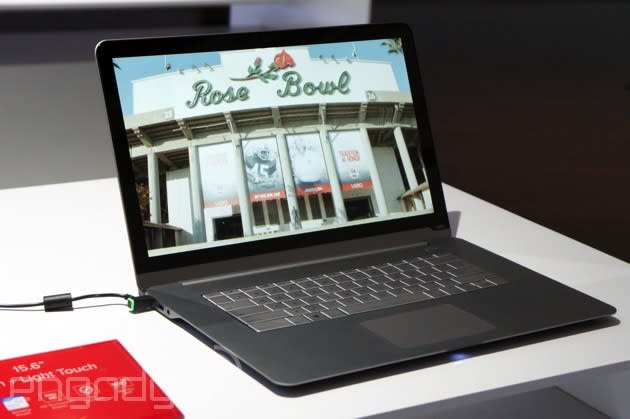 At this point, we wouldn't be surprised if Intel used CES as an opportunity to talk up its next-generation laptop processors, due out later this year. That said, you'll still find the rare company that's just getting around to releasing models with Haswell. Vizio has belatedly refreshed both its 15.6-inch Thin + Light and its 24-inch all-in-one, both of which now come standard with fourth-generation, quad-core Core i7 processors, 1080p touchscreens, 802.11ac WiFi and Intel's Iris Pro graphics -- the same kind used in Apple's latest iMacs.

Other than that, these have the same designs as the PCs Vizio showed off at last year's CES, which is to say they have all-metal bodies and flat keyboards with closely arranged buttons. As always, too, these come with zero bloatware installed, just like if you bought it from Microsoft itself. No word yet on pricing or availability, but you should know this: 15.6 and 24 inches are it as far as screen sizes go. That's right, the 14-inch laptop and 27-inch all-in-one are no más, so don't bother waiting for any refreshes there.

19
In this article: ces, ces2014, hands-on, irispro, Thin + Light 15.6-inch, vizio, VizioAll-in-one, VizioAllInOne, VizioThin+Light, viziothinandlight
All products recommended by Engadget are selected by our editorial team, independent of our parent company. Some of our stories include affiliate links. If you buy something through one of these links, we may earn an affiliate commission.