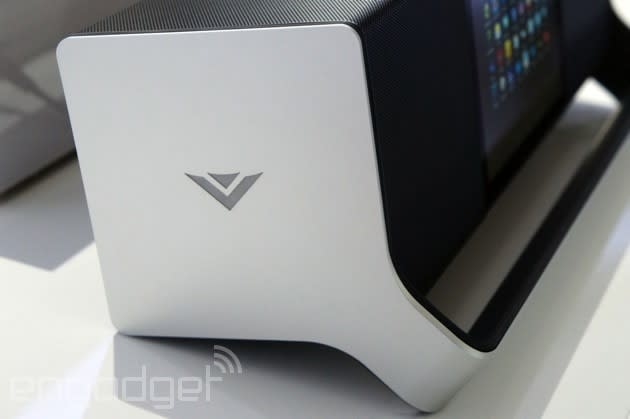 Don't call it a wireless speaker. Though Vizio's new Portable Smart Audio players are capable of streaming music over WiFi and Bluetooth, that's not how they were meant to be used. Rather, these guys have Android KitKat built in, along with a quad-core processor, allowing you to play music and video off any app you choose. Basically, then, you can bypass the streaming altogether -- a setup that's potentially easier to use, and maybe more reliable, too. And because both players have access to the Google Play store, you don't have to worry about whether Pandora, Netflix, et cetera come pre-loaded. Alternatively, the players will have some undetermined amount of built-in storage for saving music locally. And there's a USB port too if you already have your stuff stored on an external hard drive.

Available with 7- and 4.7-inch screens, the little guy is obviously more portable (think: 3.6 pounds versus 8.8). To be fair, the bigger model does have a built-in handlebar, making it easier to carry, but you'll still probably want to put it in the backseat the next time you're on your way to a beach party. At the same time, the 7-inch model brings bigger drivers and a bigger set of passive radiators, allowing the player to get down to a lower frequency of 60Hz. Believe us when we say the difference is noticeable -- the larger version definitely has a thumpier sound than the 4.7-incher, which goes down to 80Hz. No word on pricing (or battery life, for that matter), but we imagine all will be revealed before these go on sale -- whenever that happens. 5
In this article: ces, ces2014, hands-on, portablesmartaudio, vizio, vizioportablesmartaudio
All products recommended by Engadget are selected by our editorial team, independent of our parent company. Some of our stories include affiliate links. If you buy something through one of these links, we may earn an affiliate commission.