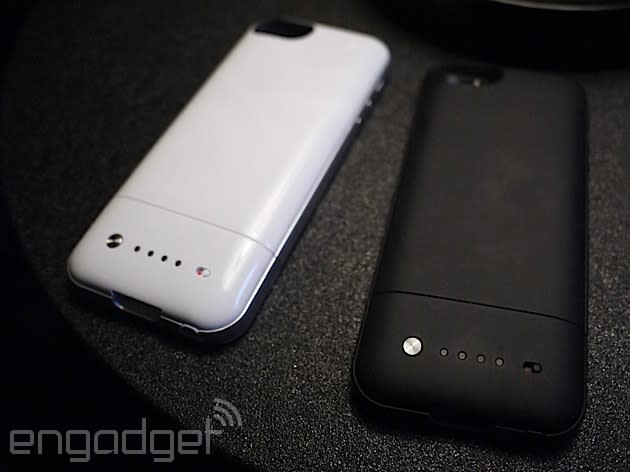 As a smartphone power user, one of the devices that intrigued this editor the most at CES was not a huge TV or a sleek sports car, but actually the Mophie Space Pack. It's an iPhone case that marries both a backup battery and additional storage -- a first of its kind, according to Mophie. The concept strikes us as an attractive one, especially to iPhone owners who are stuck with both a sealed-in battery and without the benefit of external memory. As it comes in both 16GB and 32GB versions, the Space Pack could also potentially double or triple your existing capacity. During a brief hands-on with the case, we can say that it looks very similar to the current Juice Pack Air -- indeed, it's almost indiscernible as far as look and feel goes. The only difference seems to be a silver brushed button on the back instead of a simple plastic one.

If you're expecting the Space Pack to merge seamlessly with your existing iPhone storage to be one giant hard drive, you're sadly mistaken. The Space Pack really acts more like an external USB stick to which you can offload files. This is why Mophie requires you to use a special iOS app called Space, not only to manage that additional storage, but to access it at all. Unfortunately, this means that iPhone apps like the Camera Roll and iTunes are not integrated with that extra capacity -- after you transfer over those files, they're only accessible through the Space app. As such, Mophie has recommended that most first-time users simply dump their entire Camera Roll or iTunes library into the Space Pack so that they can empty out their iPhone's capacity and start "fresh." The Space app does have its own built-in camera function that captures photos directly to the Space Pack, and there's a built-in media player as well for playing videos and audio stored on it. In our demonstration, the video played seamlessly without any hiccups, and taking pictures seemed as easy as with the default camera. However, you won't be able to edit those photos as it lacks an editing function, at least for now. Also, these sub-apps require some effort to use and we'd rather we could just add this storage on to our existing apps, or at least have an easier way to synchronize them.

Despite these issues, however, we still think this is the best bet most iPhone users have if they're short on storage space and battery life and need an easy way to deal with both. The lightweight design of the Space Pack is nice, and the base model only costs about $50 more than the Juice Pack Air. Either that, or you could just practice some judicious file collecting and rely more on the cloud for your storage woes. As a reminder, you can pre-order the Space Pack starting today from Mophie's website. It comes in black and white. The 16GB model is $149.95 while the 32GB version is $179.95, and both are expected to ship by March 14th.

In this article: ces, ces2014, hands-on, iphone, iphone5, mophie, mophiespacepack, spacepack
All products recommended by Engadget are selected by our editorial team, independent of our parent company. Some of our stories include affiliate links. If you buy something through one of these links, we may earn an affiliate commission.