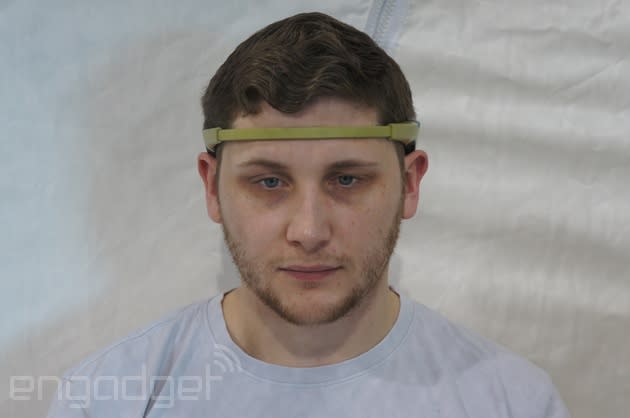 If you think the person above looks weathered, broken and a little bit ill, you'd be right. After all, it's the last day of CES, and although this editor wasn't sure he had any working neurons left, he nevertheless took a trip to InteraXon's booth to check out the consumer-ready version of Muse, the mind-probing headband. We first came across Muse this time last year, and in terms of hardware, only minor changes have been made. The EEG sensors in contact with your forehead -- seven in total, measuring four channels -- are now made of conductive ink instead of cold metal, the whole thing is more flexible, and rubbery cushions have been added to its ends. These make wearing the headband perfectly comfortable, but otherwise, its form factor remains unchanged. The band itself is available for pre-order for 270 bucks, with the first units expected to start shipping in spring. To make use of the hardware, InteraXon has, of course, developed companion software for iOS and Android (the band communicates with mobile devices via Bluetooth). Last year, we saw a basic demo whereby changes in our brain activity triggered different events in a wintery scene. What the company has built over the past year, however, is much more polished. The app, which we experienced on an iPad mini, starts with a couple of calibration exercises. These go from making sure the headband is fitted properly and all sensors are registering brain function, to asking you to think about different topics for determining what your "noisy" mind looks like. The grand finale is a beach scene that reacts to your mental state. A lady with the soothing voice of a classical radio DJ, who has guided you up to this point, requests that you close your eyes, focus on your breathing, and relax. The more zoned-in you become, the lighter the wind, and sustained periods of concentrated calm will even coax birds to land on the beach. Following your timed session -- ours was three minutes, but you can increase this -- the app follows up with some stats. There's also a "gamification" element that awards points based on how long you were able to hold an engaged, albeit relaxed state.

Accumulating points over time unlocks more advanced features, but InteraXon really wants you to set personal goals after you've "completed" this process. While others will be able to create games and the like using Muse's SDK, planned updates to the official software will look at data accumulated over the long term and how users might benefit from different and regular mental work-outs -- like a fitness tracker for your grey matter. After all, the company's goal is to help improve your cognitive function, memory, and decrease stress by using its headband and software. For us, at least, a few minutes of slow breathing and the sound of distant waves certainly did the trick after a long week in Vegas.

Edgar Alvarez and Terrence O'Brien contributed to this report.
In this article: android, ces, ces2014, eeg, hands-on, headband, interaxon, ios, muse, video, wearable
All products recommended by Engadget are selected by our editorial team, independent of our parent company. Some of our stories include affiliate links. If you buy something through one of these links, we may earn an affiliate commission.