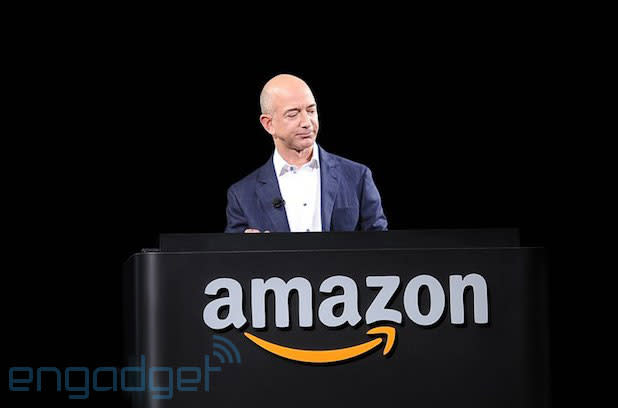 If the rumors surrounding Amazon's forthcoming set-top box are any indication, the company's betting big on online video delivery. It's a move Amazon may even be hinting at with its latest recruitment event in Boston. But as the Wall Street Journal reports, access to third-party streaming apps via a set-top box and original programming aren't the only parts of Amazon's online video strategy -- it reportedly wants to get into live TV streaming, as well. The company has allegedly met with major content providers in the hopes of inking licensing agreements for this new cable-like service, though current talks are said to be preliminary.

It's not clear if this new pay-TV initiative would be bundled into Amazon's Prime Instant Video service or offered as a standalone package. What's certain is that Amazon would need to price the service competitively so as to stand out amongst its competition -- a somewhat daunting task considering existing carriage agreements. Content providers currently rely on lucrative licensing agreements with cable operators and, typically, balk when those terms aren't favorable (exhibit A: CBS' recent dispute with Time Warner Cable). It remains to be seen if Amazon would be able to lock down agreeable terms for live TV channels and how that would impact subscription packages. Like most of Amazon's rumored projects, however, this could end up being just another exploratory project that may not see the light of day. Regardless, we've reached out to Amazon for comment and will update when we hear back.

Updated: Amazon has since responded to our request for comment, saying that the Wall Street Journal report is untrue and that the company has no plans to license TV channels or build out a new pay-TV service. You can read Amazon's official statement below.

We continue to build selection for Prime Instant Video and create original shows at Amazon Studios, but we are not planning to license television channels or offer a pay-TV service.

In this article: amazon, amazon prime, amazon prime instant video, amazonprime, amazonprimeinstantvideo, hdpostcross, LiveTv, livetvstreaming, payTV, PrimeInstantVideo, rumor
All products recommended by Engadget are selected by our editorial team, independent of our parent company. Some of our stories include affiliate links. If you buy something through one of these links, we may earn an affiliate commission.