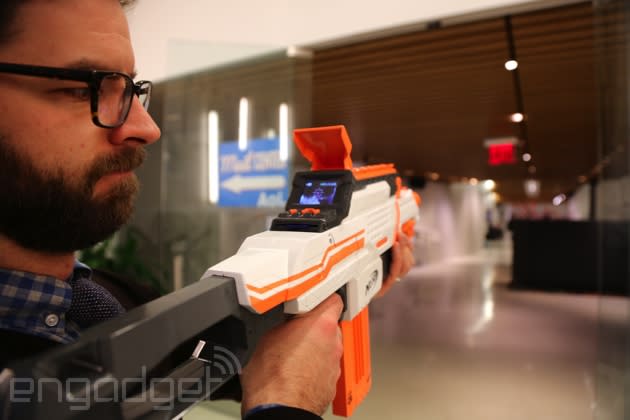 Honestly, who cares about CES? It's always the same parade of TVs and in-dash infotainment systems that only a very small portion of the population is going to buy. The good stuff -- the really good stuff -- is at Toy Fair. Every year, Hasbro brings its A-game to the convention, and 2014 is no different. The event itself is still a few weeks away, but the company's reps were kind enough to swing by Fort Engadget ahead of time with a prototype of their big-ticket item for the year, the (deep breath) N-Strike Elite NERF Cam ECS-12 Blaster (phew...). While we can't say we're enamored with the name, we are pretty stoked about the blaster itself. The concept is simple, so simple in fact we can't believe Hasbro hasn't thought of it before. The ECS-12 is your standard, semi-auto NERF blaster with a small camera mounted on the barrel and a tiny screen on the stock. The screen does allow you to line up your crosshairs on a target, even while taking cover, but more importantly it lets you capture your foam dart battles in a first-person view. The ECS-12 certainly isn't the most technologically advanced device in NERF's arsenal. (That honor probably still belongs to either Lazer Tag or the Cyberhoop.) And it's not even the first blaster to let you record your shootouts. But, it is the first NERF gun with the camera built in. Until now you've had to purchase an optional Rail Mount accessory, then stick your smartphone inside the dock to record anything. This does away with the need to strap an expensive gadget to your foam firearm before heading off to battle.

Granted, the camera inside the NERF Cam blaster isn't exactly cutting edge. In fact, at 0.3 megapixel and only 20 fps, it's barely passable for even a quick YouTube upload, but it should keep younger kids (who probably shouldn't have a smartphone anyway) amused. Besides, the low resolution is what allows Hasbro to keep the price down and milk four AA batteries for three hours of recording time. Around back is a low-resolution screen with a small glare guard that acts as a viewfinder and a targeting scope. The screen does display crosshairs to help you line up shots, but the indicator doesn't appear on the actual video. In front of the 1.77-inch screen are a set of buttons that allow you to toggle between photo and video modes, plus play back or delete any of your captured carnage. A button on the far end, just below the barrel, starts and stops recording or snaps a photo. Your media is written to a standard SD card and you'll even find a 4GB one included with the toy straight out of the box.

Otherwise, operating the ECS-12 isn't much different from many of its Elite blaster brethren. You slap a quick-reload clip that holds up to 12 darts in, press the acceleration trigger at the top of the grip, then pull the launch trigger to start firing projectiles. The acceleration trigger spins up a motor inside (powered by an additional four AAs) that puts some extra oomph behind your shots, allowing the semi-automatic rifle to reach targets up to 90 feet away. The rate of fire is limited only by how fast you can move your trigger finger, though, it is possible to cause a traffic jam in the firing chamber. Thankfully, a door right above the clip allows you easy access to stuck darts.

We can't claim that the time we spent with the ECS-12 was hiccup free. The camera failed to record some of our clips and at one point the trigger simply stopped working all together. The camera's firmware also had a tendency to crash every so often, which required you to remove the batteries to reset it. And since the eight AAs are behind two separate doors (one bay for the motor, the other for the camera) sealed with a Phillips head screw, it took quite some time to get the cam restarted each time we hit a glitch. But, let's remember that this is still an early prototype. Hasbro doesn't expect the NERF Cam Blaster to be retail-ready until the fall, when it'll hit shelves for $75. The final design will feature a clear clip and blue trim (like you see above), though it already seems like the company has the balance and heft part of the equation nailed. Just a shame that the stubby butt of the gun is designed for much smaller frames than ours. Apparently NERF guns aren't designed with grown men in mind.

In this article: ECS-12, hands-on, hasbro, N-StrikeEliteNERFCamECS-12Blaster, nerf, toys
All products recommended by Engadget are selected by our editorial team, independent of our parent company. Some of our stories include affiliate links. If you buy something through one of these links, we may earn an affiliate commission.