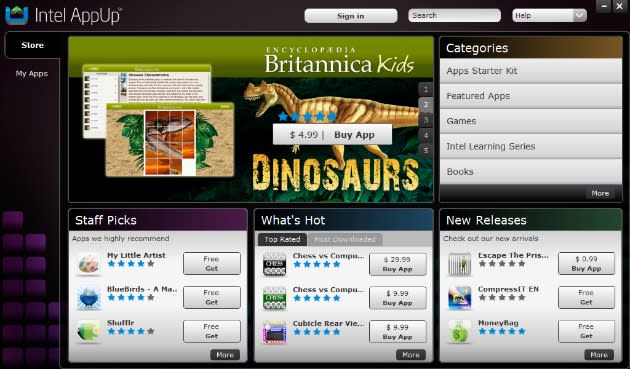 Intel is shuttering the virtual doors of its PC app store, AppUp, on March 11th. Launched in 2010, the store was designed to be a Windows app superstore in the new age of Ultrabooks, and came preinstalled on a number of Atom PCs.

In 2012, the future looked promising for AppUp, which was getting a new user every 56 seconds. Microsoft's App Store launched that year, however, overshadowing the smaller storefront. With the end of AppUp, Intel says it has its eyes on the future, and plans to spend time "developing new and exciting PC innovations." Let's hope that means more things like the Edison PC it showed off this year at CES.

Most apps will keep on trucking after the store closes, however some programs will stop working mid-2015. If you've paid for apps, you can score a full refund by filing a claim by December 14th 2014. Check out the source link for more details.

In this article: app stores, apps, AppUp, intel, PC, Windows
All products recommended by Engadget are selected by our editorial team, independent of our parent company. Some of our stories include affiliate links. If you buy something through one of these links, we may earn an affiliate commission.