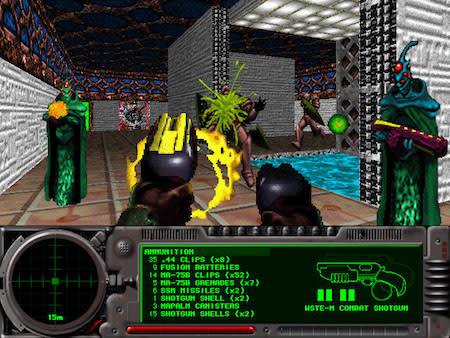 Mac users have always been second-string players in the world of computer gaming. For every AAA title that debuted on both Mac and Windows, a hundred games never reached for that gleaming Apple. Growing up in the '90s, I was a Windows user and never heard an end to the complaints from my Mac gamer friends about the vicious neglect of the gaming community. With one shining exception. The one series that didn't come to Windows -- Marathon.

Now, thanks to the wonders of the internet, you can play each and every game in the Marathon trilogy for free, on your modern machine. Utilizing the Aleph One game engine and with the blessing of Bungie, these three classics now run on Mac, Windows and Linux. Marathon 2 features the enhanced graphics found on the Xbox Live remake, while Marathon Infinity has support for online multiplayer. With three titles for nothing, you've got a lot of gaming to do.

The titles are also available for iOS if you'd rather play on your iPhone or iPad. You can find them here; Marathon 1, Marathon 2 and Marathon Infinity.

Developed by a pre-Halo Bungie Studios, the Marathon series was on the cutting edge of the first-person shooter genre. Marathon introduced concepts like dual-wielding weapons and real-time voice chat in multiplayer. The three games feature a physics engine that allows for changing gravity, bringing as much depth to actual gameplay as the incredibly complicated story.

Marathon 2 continued the innovations with the ambient noises and the ability to swim. It was also the only title in the trilogy to be ported to Windows. For Marathon Infinity, the series took a hard turn toward the surreal with a story that transcended time and space to send you blasting evil through alternate realities.

These open-source updates have been available for a while now, but our readers may not have been aware of them. Readers who grew up on modern shooters may be unimpressed by Marathon's graphics at first, but once you get involved in its tales of inter-dimensional alien warfare, this game will go from history lesson to heart-pounding thrill ride. See what the developers of Halo were working on before they changed console gaming forever. Give Marathon a spin.

In this article: bungie, classic, free-to-play, games, gaming, halo, history, Mac, marathon
All products recommended by Engadget are selected by our editorial team, independent of our parent company. Some of our stories include affiliate links. If you buy something through one of these links, we may earn an affiliate commission.