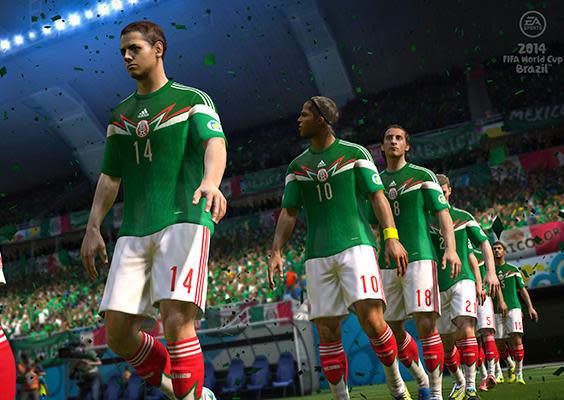 As is the case every four years, FIFA's biggest football competition is about to take place. To celebrate the 2014 tournament, which will be played in Brazil, EA Sports is releasing a title to give fans a chance to virtually experience the World Cup on gaming consoles. While the 2014 FIFA World Cup Brazil game will be available on PlayStation 3 and Xbox 360, we were surprised to find out that EA Sports won't be bringing it to their next-gen revisions, the PlayStation 4 and Xbox One. Here's what the game's Lead Producer, Mat Prior, told us:

When we made the decision we considered a number of factors but most importantly we wanted to create the best game we could that could reach as many people as possible and the way to do that was make our best game yet on Xbox 360 and PlayStation 3. We gave our team the mandate of setting a laser focus on building the highest quality game for X360 and PS3 they could, and that's exactly what they are doing.

The news will likely disappoint the hardcore football folk, as they were probably looking forward to playing this year's World Cup title on their shiny new Xbox One or PS4. Not all is lost, however: "We will have a range of engaging content within FIFA 14 Ultimate Team so that fans on the new generation of consoles can experience the World Cup in fun and unique ways," an EA Sports representative said to Engadget. Meanwhile, on the PlayStation 3 and Xbox 360, 2014 FIFA World Cup Brazil will be sold as a full, standalone game in April for $60 -- this is different than what EA did with UEFA Euro 2012, which was a $20 DLC release through FIFA 12. So, what are your thoughts? Definitely let us know in the comments below.

In this article: EA, EA Sports, EASports, Electronic-Arts, FIFA, FIFA World Cup, football, hdpostcross, soccer, World Cup, World Cup 2014
All products recommended by Engadget are selected by our editorial team, independent of our parent company. Some of our stories include affiliate links. If you buy something through one of these links, we may earn an affiliate commission.