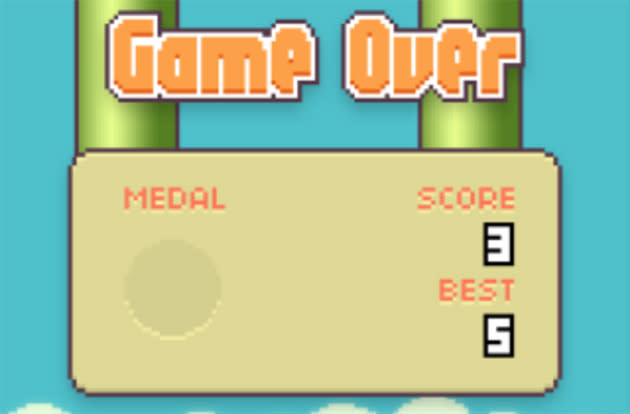 Flappy Bird went from obscurity to chart-topping success overnight, but that's all coming to an end. After over 50 million downloads, developer Dong Nguyen said on Twitter that he's going to take the incredibly tough game down tomorrow... and probably not for the reasons you'd expect.

It's not because of any legal pressure. It's not because he sold for some hefty sum. It's not even because he's tired of making games. Nguyen said Flappy Bird will cease to be simply because he just "cannot take this anymore". What exactly he means by that is unclear, but going off an earlier tweet it looks like Nguyen has grown weary of all the attention he's been getting lately. Who could blame him for shunning the spotlight? He created the app in just a few days in 2013 and it languished before exploding in popularity a few weeks back.

The suddenness of the move prompted some to wonder if this is actually some strange publicity stunt. After all, Nguyen told The Verge just a few days ago that he was mulling over a Flappy Bird sequel, and an official Windows Phone version was in the works. Oh, and it's a little hard to fathom a one-man app studio walking away from $50,000 in daily ad revenue.

In this article: addictive, android, app, av, flappybird, gaming, ios, mobilegaming, TL18VRL
All products recommended by Engadget are selected by our editorial team, independent of our parent company. Some of our stories include affiliate links. If you buy something through one of these links, we may earn an affiliate commission.