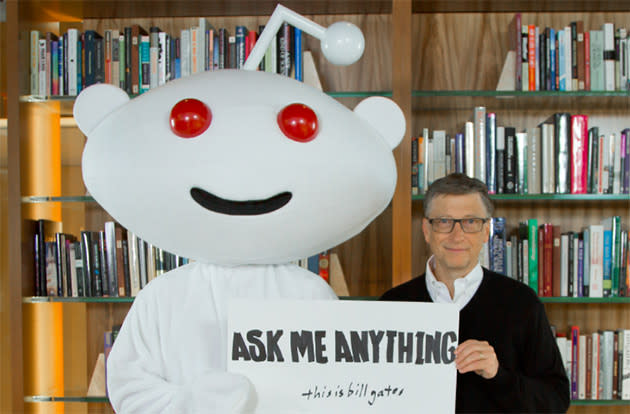 Bill Gates plays bridge, washes dishes each night and prefers In-N-Out to McDonald's and Burger King (as any sane person would). The Gates Foundation chairman offered up those tidbits and more in another Reddit AMA today, an hour-long dialogue that unearthed a few gems.

Let's consider the Microsoft situation. We already knew Gates would play a more prominent role in the company now that Satya Nadella is running the show, and he confirmed that he's going to spend about one-third of his time on "product work" for the company. Pretty vague stuff, but he clarified just a bit:

"I make sure we pick ambitious scenarios and that we have a strong architecture to deliver on them. I encourage good work (hopefully)."

Speaking of Nadella, Gates seemed appreciative of the new CEO's fresh set of eyes as Microsoft fights in an age when desktops are dying and mobile has become a top priority. Steve Ballmer laid out a strategy for Microsoft that involved pushing devices and services to consumers and enterprises, and now it's Nadella's turn to execute it. Gates seems bullish on that vision, though TechCrunch points out it may be because he was around while it was still being shaped.

Naturally, not all of the questions fawned over Mr. Gates. When asked if the Gates Foundation's philanthropy ever went awry, he pointed to a school lunch program that sadly didn't pan out.

"One thing that is tough is when you think the government will take over something you start but they don't," he said. "It might have been better if we hadn't done it."

Gates didn't shy away from the really tough questions either. When asked if he could still leap over a chair in a single bound the way he did in front of Connie Chung in 1994, Gates came clean:

"No I cannot. I can still jump but not over a full sized garbage can like I used to be able to. Be careful -- it can hurt if you don't succeed."

He hasn't totally lost his hops though: He can still bound over small chairs. Oh, and his wife would probably watch a Gates biopic starring Samuel L. Jackson as the man himself. Really though, who wouldn't?

In this article: ama, billgates, chairs, gatesfoundation, microsoft, philanthropy, reddit
All products recommended by Engadget are selected by our editorial team, independent of our parent company. Some of our stories include affiliate links. If you buy something through one of these links, we may earn an affiliate commission.