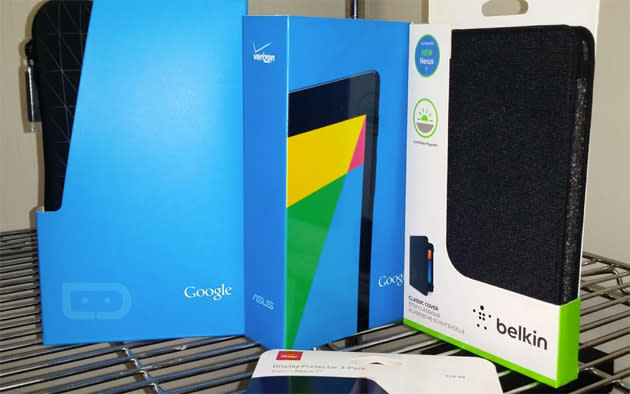 As reported yesterday, Google's Nexus 7 tablet will finally become available on Verizon Wireless with support for the carrier's LTE network. And it looks like rumors got the date right, too; the 7-inch Android slate will go on sale at Verizon this Thursday, February 13th, with the 32GB model priced at $350. The Nexus 7 will also be available on a two-year contract for $250, though only for a limited time.

If you already own a 2013-edition Nexus 7, you'll be able to access Verizon's LTE network once you've downloaded the latest Android software update. Adding the tablet to your Share Everything plan will cost an extra $10 per month. Google's 7-incher had to undergo a lengthy certification process before gaining support for Verizon's network, so today's announcement is good (if overdue) news.

In this article: google, mobilepostcross, Nexus 7, nexus 7 2013, verizon, verizon lte
All products recommended by Engadget are selected by our editorial team, independent of our parent company. Some of our stories include affiliate links. If you buy something through one of these links, we may earn an affiliate commission.