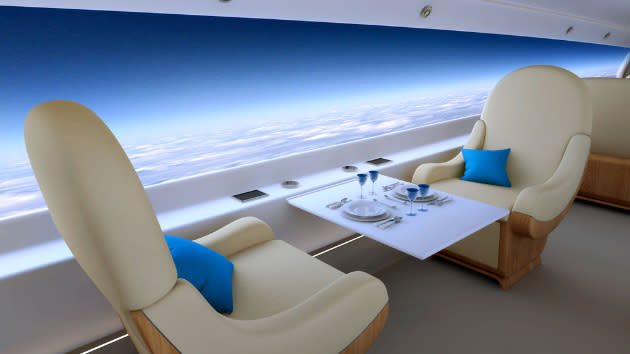 We're pretty excited about the Spike S-512 supersonic business jet, but this latest feature could potentially make a three-hour Mach 1.6 hop from New York to London a bit nerve-wracking for uneasy fliers. A post on the company's blog this week describes one of the cabin features, a "thin display screen" that's embedded in the wall. Cameras mounted around the jet's exterior will power a panoramic view, which can also be swapped for other images or content that's more conductive to sleep, such as a solid dark color or a starry night scene. Removing the windows helps Spike trim the plane's weight while also reducing drag, enabling faster speeds and boosted fuel efficiency. We don't expect commercial airliners to follow suit, however, so if flying 1,218 mph in a windowless tube is something that strikes your fancy, you'll need to hop aboard an S-512 after the supersonic jet takes to the skies in 2018.

In this article: airplane, airplanes, display, displays, jet, jets, plane, S-512, spike, spikeS-512, supersonic
All products recommended by Engadget are selected by our editorial team, independent of our parent company. Some of our stories include affiliate links. If you buy something through one of these links, we may earn an affiliate commission.