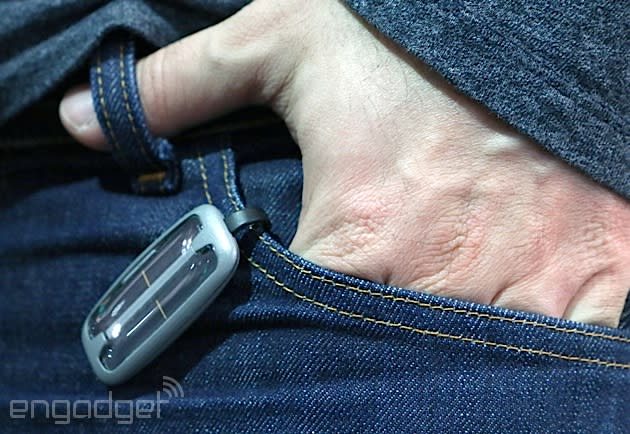 There are wearables to track your exercise activity, food consumption and sleep habits. There are even wearables that want to be smartphones-lite. But never before has there been a portable tracker for daily sunlight exposure. That's a niche GoodLux is looking to fill with its SunSprite, a solar-powered, Bluetooth 4.0 wireless device with a Harvard Medical pedigree that's launching today on Indiegogo. And it's gone everywhere with me this past week in Barcelona as I've raced in and out of conference halls to cover Mobile World Congress. The SunSprite itself is quite small, about the size of a stick of gum, and requires no charger or USB connection as it's fully reliant on solar power. It simply records user's daily sunlight exposure and makes that progress available, via a series of LEDs in its center, with the press of one side-mounted button. There's also an in-development companion app for iOS to gather this data and relay it back to users in a coherent manner, so they can view how different levels of exposure have affected activity and sleep cycles over time.

It seems odd that GoodLux would devote time and resources to creating a wearable with a single, limited purpose -- the category isn't exactly vacant at the moment. A fact further reinforced by Samsung's recent unveiling of its new family of Gear smartwatches. Despite all that, the SunSprite's creators believe it has a place in this increasingly crowded market, specifically for users that suffer from SADs (seasonal affective disorder) or depression. Dr. Jacqueline Olds, a Harvard Medical researcher and one of the SunSprite's co-creators, points to more than 30 years of sunlight exposure research as justification for her tiny gadget's health merits. Armed with that backlog of data, the company's confident it can provide users with meaningful insight into how they should be living their lives for the better. Translation: They need to get outside more.

Because the SunSprite requires an unobstructed view of direct sunlight, it has to face the same direction as the wearer's eyes. It's a requirement that led the company to include a strong, rubberized magnetic clasp on back for securely fastening the SunSprite to any article of clothing -- be it a bulky winter jacket, loose T-shirt or jeans. The downside to this, however, is that the magnet's just a little too strong for its own good and, in my experience, that made for a very uncomfortable experience. No matter where I placed the SunSprite, I could feel the magnet's nauseating pull on my body and, consequently, thought only of stowing it back in my bag. That's the exact opposite impression you'd want from a wearable, but thankfully, GoodLux is aware of this unfortunate quirk and plans to address it in final production units.

So did I see a marked improvement in my mood and energy levels during my limited time with the SunSprite? That's hard to say since I've only been using it for about a week. According to Dr. Olds, slight improvements in mood and sleep can be experienced in just three to four days tracking sunlight exposure with the device. But most users will likely need a full three weeks of monitoring to witness any significant changes in overall health. I will say, though, that on the days the meter indicated I'd received my full blast of sunshine, I had spent my working hours feeling relatively calm, upbeat and energetic.

That was when I remembered to check the SunSprite. Since it doesn't offer any meaningful information at a glance outside of sunlight exposure, I actually found myself forgetting its existence entirely. That's hardly ideal for a wearable device. And it's all the more reason why the company's exploring ways to integrate its tracking tech into other devices and clothing, or build out its functionality with the addition of Vitamin D monitoring.

For now, though, GoodLux is simply focused on getting this version one product out to market and into the hands of its target demographic: quantified selfers. You know, the types that love to log their habits and set goals for healthier lifestyles. It's this group of people GoodLux is hoping will contribute to its Indiegogo campaign. Early backers that manage to snag one of the first 100 devices will have the honor of paying only $90 for the SunSprite, while those that follow will have to shell out $100. When it eventually makes it way to retail, expect to see the SunSprite go for an MSRP of around $150.

In this article: Bluetooth4.0, depression, GoodLux, hands-on, indiegogo, SADs, SeasonalAffectiveDisorder, solarpowered, SunlightExposure, sunlighttracking, SunSprite, video, wearables
All products recommended by Engadget are selected by our editorial team, independent of our parent company. Some of our stories include affiliate links. If you buy something through one of these links, we may earn an affiliate commission.