Watch out Kinect, AllSee does gesture control without a camera 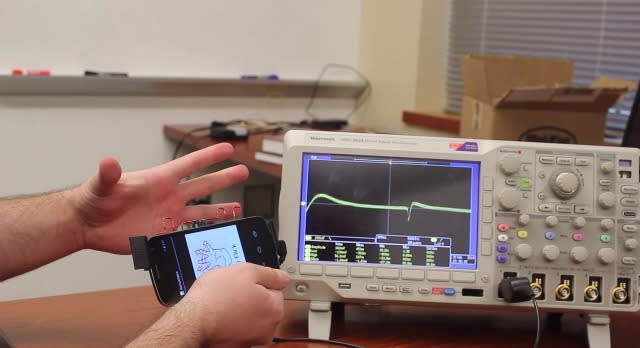 What if you could turn the music down on your phone by just waving your hand? That's the idea behind AllSee, a new gadget under development by computer scientists at the University of Washington. Built by the same guys who created the gesture-recognition in the Galaxy Nexus, the tiny sensor works completely different than the feature in devices like the Galaxy S5 that require the use of the forward-facing camera. Instead, AllSee uses TV signals to not only help it recognize gestures, but also as exceptionally efficient source power. That means it doesn't need a battery to operate and can see your movements even when your phone is out of sight in your pocket -- pretty awesome.

AllSee is able to do that by working essentially as a wireless receiver. When you move your hand, you disrupt the wireless signals around you in a way that it can recognize and then translate into a command. The best part? AllSee is able to do it all at a price of less than a buck. While the tech is currently being demoed on a phone, it's a pretty neat trick that we can see implemented a number of pretty fantastic ways. A robot to bring you a drink with a simple 'come hither' motion, anyone?

In this article: AllSee, Automation, gesture control, hands-free, mobilepostcross, research, sensor, University of washington
All products recommended by Engadget are selected by our editorial team, independent of our parent company. Some of our stories include affiliate links. If you buy something through one of these links, we may earn an affiliate commission.